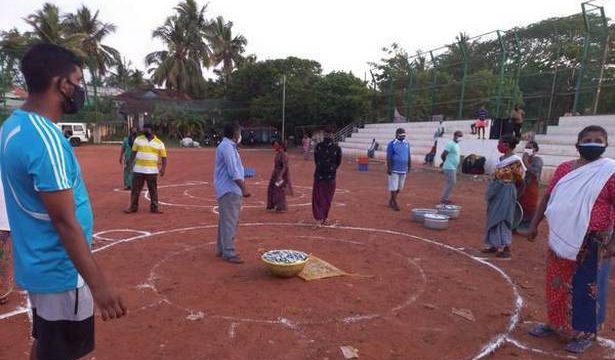 At the Valiyathura fish market, the police have been regulating entry to prevent overcrowding.

Fish auctions have come under tight leash along the coastal belt of Thiruvananthapuram district. The police have made deployments teams to enforce social-distancing norms and regulate entry in such areas that are prone to a COVID-19 spread of alarming proportions.

The City police have evolved a system involving circles drawn on sand using chalk powder by way of which the auctioneer stood at the centre and the bidders were positioned at circles around him at a safe distance.

Deputy Commissioner of Police (Law and Order, Traffic) Vaibhav Saxena said that the arrangement fostered COVID-appropriate behaviour and marked a shift from the conventional method when fish auctions witness motley crowds of buyers jostling with each other to bid for the day’s haul at fishing landing centres.

At the Valiyathura fish market, the police have been regulating entry to prevent overcrowding. Besides, no vehicles were permitted within the market area. While the market used to witness the presence of around 200 people on an average during auctions, the number has significantly come down.

“The regulations which were arrived at through deliberations held with fishermen and auctioneers have began to attain results. We have succeeded in taking the local populace into confidence,” says Shangumughom Assistant Commissioner of Police (ACP) Nazeer M.A.

The winds of change have also reached the Vizhinjam fishing harbour where the harbour committee handpicked over a hundred volunteers to enforce the pandemic norms at all times, especially during the auctions that take place twice or thrice a day depending upon the fish catch.

Vizhinjam station house officer Ramesh G. said that volunteers operate round-the-clock and assist the police in enforcing physical-distancing and frequent sanitisation. Vehicles that enter the harbour are tightly screened at the entry points, he added.

While fishing has been partially suspended in most areas in view of the inclement weather, the COVID-19 arrangements are bound to be implemented in full swing in the days to come.