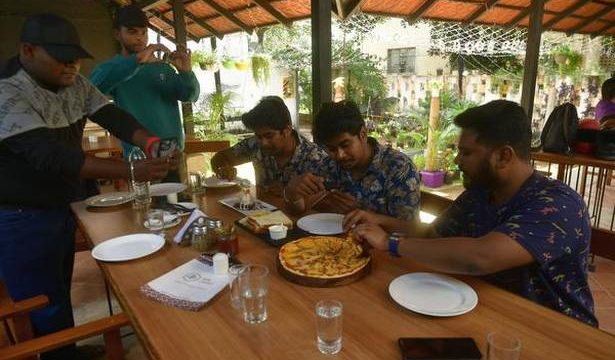 Views increase as people look to them to recommend restaurants

While people were confined to their homes during the lockdown as a precautionary measure against the spread of COVID-19, social media became a platform for quick recipes, budding home chefs and the most popular- food bloggers. People who would have otherwise spent their time doing regular jobs began to, through their videos, entertain people and also showcase food trends in the city.

A. Rowland Burges, a 27-year-old businessman, gained popularity through recipes he would prepare along with his mother. "Like everyone else, we would look up videos on YouTube, prepare the food and share the videos. For me it was just a way to document the time and the growth was unexpected," he said. Mr. Burges goes by ‘Trichy Foodie’ on Instagram, which has around 1 lakh followers. He has recently been nominated for an award in the Food Blogging category.

V. Hariharan and V. Sridharan -a pair of twins, also use the platform as a way to spend time with their parents. They operate ‘Twin Food Delight’ which has nearly 23,000 followers.

Apart from preparing home cooked food, the bloggers also purchase takeaway orders from restaurants and try them out. "We make it clear that we pay for the food, and therefore our opinions are ours. However, many refuse to believe us," Hariharan said.

For K. Vedha, one of the city’s only female food bloggers, the process was different. Unlike her counterparts, she began a YouTube channel where she posted homemade recipes of food that was rare in restaurants in the city and eventually made the transition to Instagram. The food blogging community has been welcoming, but a girl going by herself to take videos and photos, especially of street stalls at night is unheard of. “I usually go along with other food bloggers,” she said.

Yukesh Raaj, a techie by day, spends weekends on food blogging- what he calls his passion. He believes that the food scene in Thanjavur needs to improve to catch up with Tiruchi. "Everyone seems to make only a few dishes. There needs to be variety and also an attempt at new cuisines so the people can try something new," he said. However, he takes pride in the pocket-friendly nature of the items in his city.

Most bloggers have become a close-knit community and share tips and tricks, feedback and even shoot for one another at times. Their families too have become involved in their work. Hariharan and Sridharan’s parents purchased cookware to serve the food, and even shot meals they ate when their sons did not accompany them. Their viewership is not restricted to youth as many including their relatives, neighbours consult them before going out to eat.

Investing in good quality equipment has been a game-changer, they say. Mr. Burges has even hired a team of photographers to shoot his videos.