The bombshell resignation of hardline Kashmiri separatist leader Syed Ali Shah Geelani last week as “chairperson for life” of the APHC has caused a near implosion in the Hurriyat. 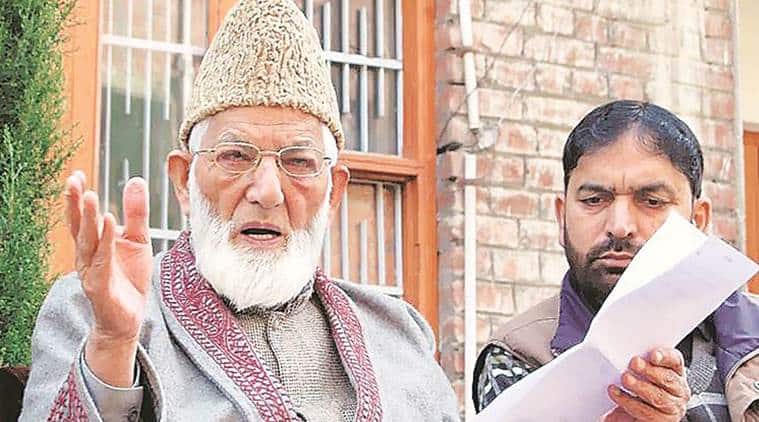 Two years ago, few would have imagined that questions raised within the All Party Hurriyat Conference (APHC) about an alleged racket in medical seats in Pakistan would come to such a pass.

The bombshell resignation of hardline Kashmiri separatist leader Syed Ali Shah Geelani last week as “chairperson for life” of the APHC has caused a near implosion in the Hurriyat.

In his resignation letter, he accused Hurriyat representatives of corruption and cosying up to power structures in Pakistan which, ironically, is the shadow patron of the Hurriyat and whose voice he was in the Valley. He also nominated Abdullah Geelani, no favourite of Islamabad, as his successor.

The unravelling of this umbrella group of separatists is a high-stakes political thriller still awaiting a denouement. How it ends could have far-reaching consequences given the political vacuum in the Valley.

Its roots go back to the 2018 controversy over medical seats, sources have told The Sunday Express. Geelani’s reference to an “internal investigation,” in his letter is linked to this issue.

For close to two decades — beginning with the détente in the Musharraf years — Pakistan rolled out the red carpet for Kashmiri students wanting to study medicine and engineering. Until last year, students who could not get admission locally would head to Pakistan, where seats were reserved for them in colleges in PoK, Islamabad, Karachi and Lahore. Most seats were fully sponsored by the Pakistan government, which used the Hurriyat, on both sides, to decide the allocation of these seats.

An indication of how many Kashmiris studied in Pakistan came when hundreds crossed the Wagah border last week and are now at Amritsar, waiting to be transported back to their homes.

In 2018, Abdullah Geelani, a Kashmiri and a former member of the Hizbul Mujahideen, who has lived in Pakistan for many years, alleged that Ghulam Mustafa Safi, then convenor of the Muzaffarabad chapter of the APHC, was “selling” these seats in Kashmir.

Abdullah is the younger brother of the late Delhi University teacher S A R Geelani who was acquitted of involvement in the 2001 Jaish attack on Parliament.

Last year, no students went because of uncertain conditions in Kashmir but before that, in Srinagar, it was an open secret that both the Geelani and Mirwaiz factions of the Hurriyat held sway over who got the seats, according to a beneficiary.

Geelani Senior’s grand-daughters, too, study medicine in Pakistan, but after allegations of racketeering first surfaced, he stopped recommending names for the seats.

The allegations are now part of a National Investigation Agency investigation in which several Kashmiris are accused and are in Tihar Jail.

But even before the NIA investigation, it had set off a storm in the Hurriyat. Geelani sacked Safi at the end of 2018 and appointed Abdullah as convenor in January 2019.

But Abdullah Geelani’s convenorship was stormy too. He was not popular with the other Hurriyat leaders in PoK, nor, more importantly, with the Pak establishment.

Armed with Geelani Senior’ s mandate, he initiated enquiries against Safi. But Safi, said to have the backing of the Pak establishment, remained a parallel power centre.

In his resignation letter, Geelani Senior makes a reference to these allegations, and says when “investigations” were launched by the party, “to circumvent the process of transparency and accountability…your representatives started non-cooperating with the convenor…”

Safi denied that his exit as convenor of the Hurriyat’s PoK chapter was acrimonious. “There are no differences between us,” he said, but added that “as I am the representative (in PoK) of the Tehreek-e-Hurriyat which is not part of APHC…I am not bound by the leadership of the APHC”.

Safi said he owes allegiance only to Ashraf Sehrai, leader of the TeH in Kashmir. Sehrai, whose militant son was recently killed in an encounter, remains a serious contender to the leadership of the post-Geelani Hurriyat, despite Geelani’s naming of Abdullah as heir.

Meanwhile, Abdullah was burning his bridges with Islamabad. Sources said after the August 5 decisions in Kashmir, Abdullah Geelani became a vocal voice against the Pak establishment for not doing enough to protest New Delhi’s moves.

Hizbul Mujahideen chief Syed Salahuddin, too, began to question the silence of the Pak establishment. One view in Pakistan is that Geelani’s resignation may have also had a Hizb push. At one stage, Salahuddin questioned how some leaders in Kashmir had escaped detention while others had not, and why those who were free had not spoken up. Geelani’s resignation letter too raises this concern.

The Indian security establishment has also been saying for some months that Salahuddin has been sidelined, and the new Kashmir militant outfit, The Resistance Front, is a Pak-created front of the globally designated Jaish-e-Mohammed and Lashkar-e-Toiba, and is a snub to the Hizb.

Meanwhile, Hurriyat leaders in Srinagar too have questioned the authenticity of Geelani’s resignation letter saying he is in a state of advanced dementia, and allege the letter is a fabrication by Abdullah.

“He has been made completely inaccessible. The security around his house (Geelani is under house detention) doesn’t allow any of us to meet him and his access to the telephone has been cut off by people who don’t want us to talk to him,” said a Hurriyat leader in Srinagar, who did not wish to be named.

The APHC in Muzaffarabad brought out a “report” alleging that Abdullah had foisted himself on the elder Geelani. It alleged Geelani’s son Dr Nayeem had “managed” to make Abdullah the convenor in 2019.

Abdullah rejected the allegations. “Geelani sahib, as he has said in his audio message, has written a letter to the Hurriyat constituents. We did not leak that letter so we can’t deny or confirm the letter that is making rounds of the social media,” he told The Sunday Express.

“In 2018, when Geelani sahib removed Safi sahib, this propaganda about me and Nayeem Geelani continued for one of two months. That was laid to rest when Geelani sahib called me during a (Hurriyat) meeting and informed everyone that I am his representative.”

He also said the apprehensions about Geelani’s health were not true, and claimed he spoke to him “every alternate day…for five, ten minutes.”

Abdullah said it was the administration in Kashmir that had placed him under house arrest and barred access to him. As for telephonic access, said Abdullah, “the people (in Srinagar) would have taken this decision for some reason. They would know it better.”

Nayeem Geelani, who lives with his father in Srinagar, told The Sunday Express he would not respond to the accusation against him. “He (Geelani) has a nominated representative Abdullah Geelani. He is authorised to speak, he is authorised to give statements,” he told The Sunday Express. “I can’t. How can I, on what basis? Family has nothing to do with it.”

When asked why telephone access to Geelani had been barred, Nayeem said it was his father’s decision. “He has not been talking to media for two years now. He has himself said that he will not talk to media directly.”

On June 3, Abdullah was ousted in Muzaffarabad, and replaced by Hussain Mohammed Khatib, said to be a front for Safi. The new appointment was approved by the APHC in Srinagar at its June 5 shura, minus Geelani’s participation, a flashpoint for his resignation.

Even as it opposes Abdullah, Islamabad knows Geelani remains a powerful voice, and would prefer that he withdraw his resignation, according to a source.

On this side of the LoC, government sources said they were not backing anyone in the leadership stakes. Said an official: “It is enough for us that there is so much confusion in the separatist ranks. It’s best if this confusion remains.”

How Well Do You Know Harivansh?
Celebrity News

Bigg Boss 14: Vikas Gupta REMOVED from the guest list at the last minute, says, ‘I was game for it but they changed their mind’

Mike Tyson's Legendary Trainer Says He Could Hang W/ Fury, Joshua And Wilder
We and our partners use cookies on this site to improve our service, perform analytics, personalize advertising, measure advertising performance, and remember website preferences.Ok