‘Traders have been the worst hit because of the government’s policies, but for some unknown reason, many continue to support the BJP.’
Thirumoy Banerjee reports from Chandni Chowk. 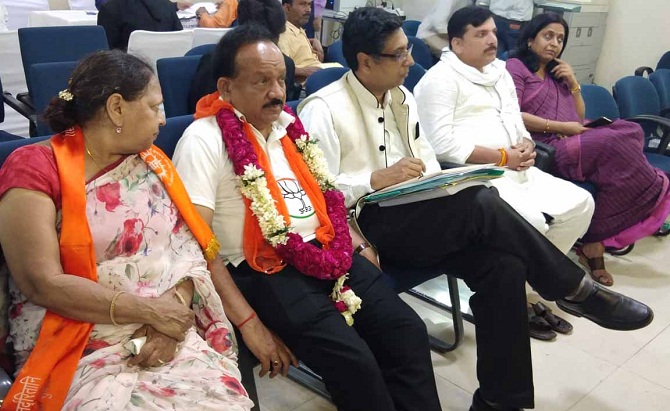 At the labour chowk in Adarsh Nagar, jobless men gather to watch. Unfolding in front of them is a road show by Bharatiya Janata Party candidate and Cabinet minister Dr Harsh Vardhan in the Chandni Chowk constituency.

Some 250 people stand amid the sea of saffron flags. Handed a cap by BJP supporters, migrant labourer Yogendra Paswan jokes: “I’ve already got one on, but I suppose I can wear this one too for a while.” Turning serious, he adds: “And I wish the labour chowk had some jobs too.”

“Don’t say ‘cordon’, say ‘sealed’,” says Sanjeet Kumar, who has a small construction business. “Those shut shops you see there, that’s gali number 13 where the BJP-led MCD (Municipal Corporation of Delhi) went on a sealing drive. At least 50 shops must have been sealed in the area. It has been several months and they are yet to be opened.”

The MCD has sealed many shops across the capital, citing flouting of norms and the illegal use of residential properties for commercial purposes.

The impact of the drive, GST, demonetization, and the job losses caused by all three policies are the top issues here, from Tri Nagar to Wazirpur and from Sadar Bazar to Ballimaran. The seat could witness a close three-way contest among Dr Vardhan, the Congress’s J P Agarwal, and the Aam Aadmi Party’s Pankaj Gupta.

Of all the seven seats in Delhi, this constituency has the smallest number of voters. Seven of the 10 assembly constituencies under this seat are home to some of the city’s prominent wholesale markets and industrial units.

“Agarwal is a local. He has a strong connect. He will get a lot of votes in Chandni Chowk and the surrounding areas. There have not been too many cases of sealing here, but the prices of raw materials have gone up following GST. Customers do not listen, they want to pay the same price as they did earlier, and at times we have to give in,” says Mukesh Kumar Gupta, owner of Usha Tailors.

According to reports, in 2014, Chandni Chowk had a footfall of about 500,000 people and a turnover of a few hundred crores per day. After demonetisation, this nosedived by 70 per cent. Recovery has been slow and is by no means complete.

“Traders have been the worst hit because of the government’s policies, but for some unknown reason, many continue to support the BJP. But I can bet you that you won’t find many shop owners here supporting the BJP,” says Vijay Gaur of Pandita ki Hatti snack shop.

On the campaign trail, Vardhan has said development has happened. “I go to the gym at a park near Old Delhi railway station. It hardly had any equipment a few years ago. Now it looks much better,” says chartered accountancy student Ravi Kumar.

But for Affan Riyazi, a student at Jamia Riyazul Uloom who sells fibre plates and cups outside Jama Masjid, other needs are more pressing. “We need a system under which there will be no GST on cheap goods. No one speaks on real issues. How will Balakot or CCTVs help us?” he asks.

Outside the Red Fort, 50 people shouted slogans in favour of NOTA (none of the above).

“NOTA will be a way for people to lodge their protest. The BJP is communal, the Congress has got enough chances and the AAP’s balloon has burst,” says Colonel Jaivir Singh (retd), Delhi president of Swaraj India, the party founded by Prashant Bhushan and Yogendra Yadav following their expulsion from the AAP.