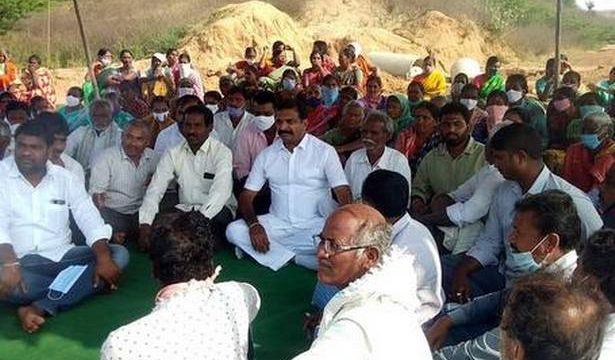 Day by day, the oustees of Gudatipally village — submerging under Gouravelli project — in Akkannapet mandal of Siddipet district have been intensifying their agitation, with support pouring in from various quarters.

Husnabad MLA V. Satish Kumar, who visited the site of the ongoing agitation at Gudatipally on Tuesday, had a bitter experience with oustees raising slogans against him. They demanded that the government keep its promises and said they are ready to vacate the village once all payments are cleared. They alleged that while some names were published in the draft, they went missing in the final list of beneficiaries. A large number of oustees poured out their problems before the MLA.

However, soon after coming from the oustees’ protest camp, Mr. Satish Kumar announced that the works of Gouravelli will progress come what may and the government has decided to complete the project. “Some people are trying to stop the works. This is not acceptable and we will not tolerate it ,” said Mr. Satish Kumar while addressing a press conference on Tuesday.

His statement irked the oustees and late in the night they wrote an open letter to the MLA. “We have been protesting for the last six days and the officials are not addressing our issues. We are not interested in stopping the works of Gouravelli reservoir. Pay us the entire compensation without keeping anything pending and we are ready to vacate the village. If the MLA fails to understand our problems even after coming here, whom are we to approach?” the oustees asked. They demanded payment of compensation on the lines of that for Mallannasagar and sought to know whey the government is discriminating against the oustees of Gudatipally.

The matter is getting complicated everyday with the government not considering the demands of oustees and the protesters sticking to their guns.

“How can we rely on empty promises, which were violated for the past several years numerous times? We are aware of the bitter experiences of oustees under other projects as well,” said Baddam Yella Reddy, one of the oustees.