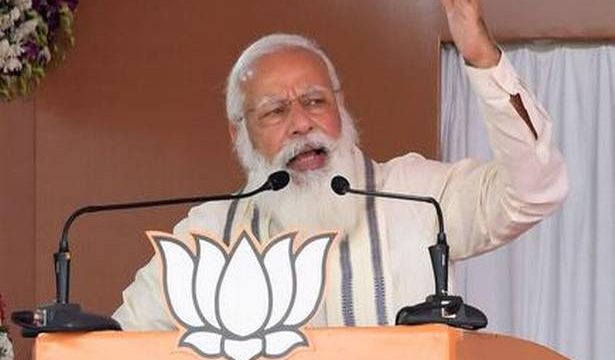 Plea says that despite various guidelines, campaigning is going on without any regard to COVID-19 norms

The Delhi High Court has agreed to hear on Thursday a plea seeking directions to the Election Commission to take action against leaders, campaigners and candidates not following the mandatory use of face mask in the ongoing Assembly elections in various States and Union Territories.

The application was filed by Vikram Singh, the chairman of think tank Centre for Accountability and Systemic Change, and former Director General of Police, Uttar Pradesh.

The Assembly elections in Kerala, Assam, West Bengal, Tamil Nadu and Puducherry are being held in various phases between March 27 and April 29.

Advocate Virag Gupta, appearing for. Mr. Singh, said he mentioned the plea for an urgent hearing, which the court accepted. The plea stated that despite various orders and guidelines, the campaigning is going on in full swing, without any regard to COVID-19 regulations.

“Reportedly, before the end of the first phase of campaigning in Assam and West Bengal, over 40 road shows and rallies had been organised by major political parties. At the same time, 59,117 fresh cases of COVID-19 were recorded in India on 25.03.2021, which is the highest in the last 159 days,” the application said.

The plea said the biggest casualty during COVID-19 had been the rule of law itself, as strict action was being taken against commoners, but there was barely any action against politicians.

“When all the authorities are unanimous on mandatory masking, it defies logic as to why the rule should not be enforced in election campaigns,” the plea said, seeking a direction to the poll panel to create awareness through digital, print and electronic media for compulsory masking and social distancing during Assembly elections.