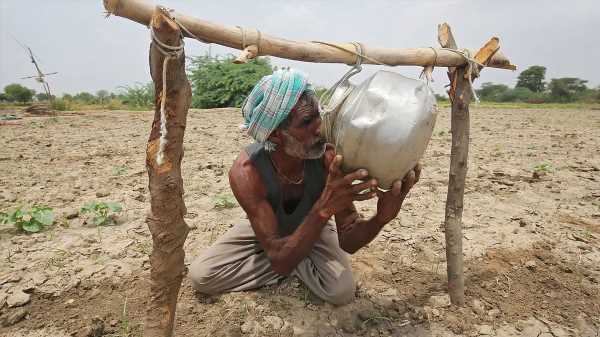 Santosh Patkar of Devgadh Taluka Sindhudurg district of Maharashtra is a worried man these days. Devgadh, which is known as the home to world famous Alphonso variety of mangoes, has seen an unusual drop in yields which is affecting farmers’ income.

Being one of the primary agricultural produce from the area, Santosh is not untouched by this somewhat rare phenomenon.

He said in his own mango garden, yields have come down by a third from most trees.

“In whole of Devgadh, usually during the peak season, around 50,000-60,000 tonnes of Alphonso mangoes are produced of which around 15,000-20,000 tonnes goes straight for processing while the rest is sold as delicacies across the globe,” Patkar told over telephone.

However, this season so far just around 30,000-35,000 tonnes of the premium mango variety has been produced.

“More than heat it is heavy untimely rains immediately after Diwali that damaged the fruit in its flowering stage and thereafter intense cold waves during winter months impacted it during germination,” Patkar rues.

The rise in heat, as per Patkar, came at a time when already the crop was ripening and hence did not have much of an impact, unlike the other factors.

Thousands of kilometers away, 26-year Shivam Singh in Barabanki district of Uttar Pradesh has seen an unusual drop in the per hectare yield of watermelon grown by him this year.

He said that till last year, he produced around 400 quintals of watermelons from his two-acre farm, but this year, the yield could not reach even 150 quintals.

“The rate in mandis is also much lower than last year as watermelons are of much inferior quality with less juice and water,” Singh said from his farm, where he was preparing the field for the next crop.

He lamented that after two years’ of COVID demand was looking good due to lifting of restrictions for major festivals like Eid and Akshay Tritya, but the yield loss has dashed his hopes.

If Singh is finding it difficult to recover the cost due to sharp drop in yields, cashew farmers in Maharashtra are also complaining of fall in their produce per tree due to heat stress.

A CRISIL report on Tuesday said cumin yields in Rajasthan and Gujarat, the two biggest producing states have dropped by 20 per cent and 15 per cent on year due to adverse climatic conditions.

This coupled with an almost 21 per cent fall in acreage is projected to pull down total cumin production in the country in 2022 by a whopping 35 per cent to 558 million.

“In my 75-years of age, I have seldom come across such intense heat,” said Ghuman Singh, a wheat farmer from Nabha sub-division of Patiala district in Punjab.

He said the average yield of wheat in fields across the Nabha and its adjoining areas is around 15-18 quintals, which has dropped by almost 45 per cent this year due to the heat.

“My cost of production is around Rs 3750 per quintal, while the average realisation even after factoring in even the recent spike is less than Rs 2500 per quintal.

“On top of that, yields have plummeted which in turn is leading to lower realisation,” Singh said over phone.

Across the length and breadth of India, farmers are feeling the impact of adverse climatic conditions which is manifested either in the form of sharp spike in temperatures or unseasonal rains earlier in the year.

The months of March to May, though, are usually considered a rather lean period for farming has seen a sharp rise in temperatures that has impacted yields of almost all standing crops be it wheat, vegetables, pulses and seasonal fruits.

This could have a serious impact on their final output leading to a surge in prices in months to come.

“Any vegetable which is at its flowering stage will see a drop in yields as the heatwave has burnt the flowers,” Shriram Gandhave, president of Vegetable Growers Association of India said.

He said the burnt has been on tomatoes and ladyfinger (bhindi).

For the record though, total vegetables production in 2021-22 as per the first advanced estimate is expected to be 199.88 million tonnes, marginally less than 200.4 million tonnes of last year. (see chart)

“Only mustard seems to have escaped the heat wave as unlike wheat its harvesting happened early, hence there is no impact on output,” said Abhay Dandwate, chief risk officer at the National Bulk Handling Corporation (NBHC).

Dandwate said as per their assessment, per hectare mustard yield this year is 1260 quintals, which is normal.

“But, for crops such as summer moong, there could be loss in yield due to moisture stress in the soil.

“And, in the case of tomatoes, as per our information particularly in Maharashtra, 25-30 per cent of the yield has been affected due to growing incidents of pests’ attack which thrives in dry weather,” Dandwate said.

The India Meteorological Department in its latest weather update said that Northwest and central India experienced their hottest April in 122 years with average maximum temperatures reaching 35.9 and 37.78 degrees Celsius respectively.

Before that in March temperatures across several parts of India touched their record highs.

“The heatwave will have a negative impact on agriculture and could lower the yields of several standing crops particularly in Punjab, Haryana and West UP,” IMD director general Mrutyunjay Mohapatra had told in that press conference.

Going forward, the met department predicted that northwest and west central parts of the country – Gujarat, Rajasthan, Punjab and Haryana – will continue to experience above normal temperatures in May as well.

The average temperatures observed in Pan-India for April was 35.05 degrees, which was the fourth highest in 122 years, he said.

The unusual heatwave is something which was not unexpected.

The United Nations Inter­governmental Panel on Climate Change (IPCC) in its latest assessment report released few months back said that due to adverse effects of climate change, crop yields in India will decline, production of commercial fish species like ‘Hilsa’ and ‘Bombay Duck’ will go down and labour capacity in agriculture will drop.

On crop yields, the IPCC report said that rice, wheat, pulses, coarse and cereal yields could fall almost 9 per cent by 2050.

While in southern parts of the country, maize production could drop by almost 17 per cent if emissions remain high.

“These disruptions to crop production are expected to cause price spikes in India, threatening food affordability, food security and economic growth,” the IPCC report said.

“Most people have been fearing the impact of sudden rise in terminal heat on crops such as wheat and once in 4-6 years this kind of thing happens for which we have been working on developing varieties that can withstand terminal heat,” A K Singh, director of the Indian Agriculture Research Institute (IARI) said.

He said the Nanaji Deshmukh Plant Phenomics Centre of IARI has been screening several types of genomes and developing wheat and other crop varieties which are tolerant to spike in terminal heat, like the one which happened this year.

The need of the hour, as many experts feel, is to expedite such research and include more crop varieties and most importantly spread the final seeds extensively among the farmers, who are in the frontline of the fight against such unusual weather.