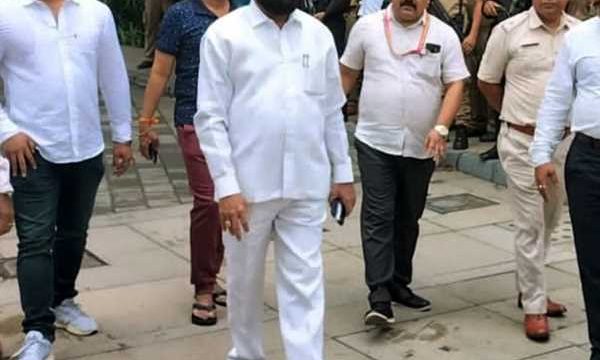 It has been an eagle one week for the Eknath Shinde-led rebel Shiv Sena faction that has been camping at a luxury hotel in Assam’s Guwahati.

While they have been watching every bit of development on television and through their contacts in the state of Maharashtra, those who have watched them closely say that the rebel Sena MLAs have maintained a reasonable calm so far.

While the Leader of Opposition in Maharashtra Assembly Devendra Fadnavis came down to Delhi on Tuesday afternoon and by the evening, he was in Mumbai at the Governor’s House.

It was a simple Dal khichadi meal that Eknath Shinde and his rebel MLA friends are enjoying at the five-star hotel.

The mood was entirely different after the court gave a huge sense of relief to the rebel MLAs by putting on hold the disqualification notice till July 11 and that was celebrated by eating the famous Maharashtrian Malvani mutton on Tuesday evening.

The MLAs have been very particular about having their own local cuisine which is essentially Maharashtrian food, sources told ANI.

Most of them have been either camped in their own rooms or in the room of Shinde having a long conversation about what lies ahead for them in the future.

Sources said many of the times, the MLAs in the Guwahati hotel come down to the lobby and have chat among themselves or indulge in multiple photo opportunities.

Sometimes they also recline by the swimming pool.

Many of them have often been seen engaging in long video calls with their family or loved ones and sometimes playing a board game.

Regular meetings are being held and motivational speeches are given by Shinde, the leader of the faction in order to keep the legislators together especially when the halt in Guwahati is taking longer than expected.

As many as 39 Shiv Sena MLAs and nine other MLAs, including two from Prahar Janshakti Party, have been staying at Radisson Blu Hotel in Guwahati since they landed in the city last Wednesday in a private charter from Surat.