For two decades the US paid in blood and blood money for dependence on Pakistan to carry out one president’s boast.
Now, having been defeated by its proxies, another president will go into Rawalpindi’s embrace to satisfy his constituents, predicts Shekhar Gupta.

‘We will not forgive. We will not forget. We will hunt you down and make you pay,’ said US President Joe Biden hours after the bombings at Kabul airport killed nearly a hundred people, including at least 13 US soldiers.

His was a valiant attempt to sound angry, resolute, and menacing.

He ended up, regrettably for him and his nation, looking exactly like what he is: Sheep in sheep’s clothing.

In polarised times, Mr Biden’s committed voters might still have tears of inspiration in their eyes.

Most of the others will feel sorry for him, or laugh.

The target of his frustrated ire, Af-Pak jihadist groups, won’t be impressed.

Don’t even try comparing this with Saigon, 1975.

There at least you were up against a regular army with an air force, backed fully by the Communist bloc, including China, and under a well-defined leadership. And with wide popular support.

This is an unconditional surrender to an amorphous, armed rabble.

With no pretension to a State structure, territorial foothold, or international support.

Unless you find it face-saving to say, instead, that you surrendered to the Pakistanis.

It is indeed Pakistan whose prime minister has proclaimed this as a liberation where Afghans, he says, have broken the shackles of slavery.

If the Afghans saw it as such, they would be out in the streets, celebrating and hugging the victorious Taliban.

They were, instead, jostling desperately in the tens of thousands at Kabul airport to somehow get out.

Mothers were throwing their babies across the razor wire, families were waiting in a sewage drain.

More of them went there even the day after the bombings, undeterred.

Any which way the Biden administration sees it, it has led the US to its most humiliating defeat.

The defence that they are only picking up the pieces left behind by the Trump administration is as fake as Mr Biden’s show of outrage and determination now sounds.

First, Donald Trump had not agreed on an unconditional surrender and retreat.

Second, even in the agreement at Doha in February 2020, his administration had refused to accept the Taliban definition of themselves as the Islamic Emirate of Afghanistan.

On the first page of the agreement, this is made clear by the American side. 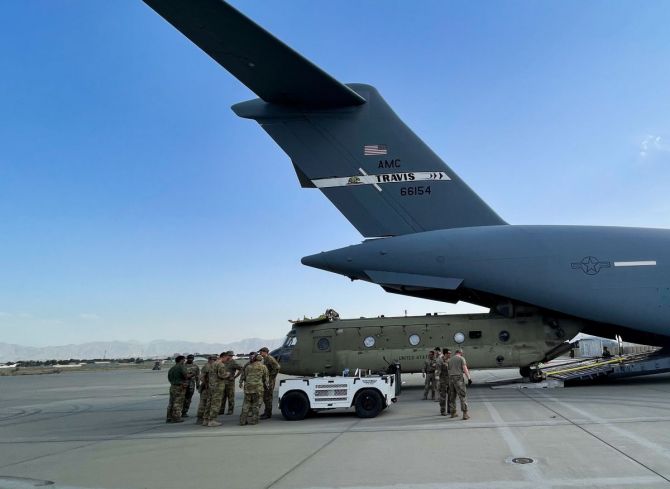 Today, this broken superpower is sharing the identities and whereabouts of its most valuable and vulnerable assets in Afghanistan in the hope that they will be protected.

This is a great superpower’s meltdown.

Not quite like the Soviet Union in 1989 because it would mean very little within America, except reducing the Biden administration to the political equivalent of ‘spoilt goods’ so early in his tenure.

Here is why we use the description ‘sheep in sheep’s clothing” for Mr Biden.

Because, unlike Mr Trump or any of his old challengers for the nomination within his own party, Mr Biden is a dyed-in-bourbon Cold Warrior.

That might just be a function of his vintage, but the Cold War won, it doesn’t seem as if he has the stomach for further power projection.

Former US president Barack Obama’s memoirs reveal how Mr Biden had firmly advised him against the Abbottabad raid on Osama Bin Laden’s hideout.

His fear then was, what if the operation failed, as it did with another Democratic president — Jimmy Carter and his attempt to bring back the hostages in the US embassy in Tehran (Operation Eagle Claw).

To the old, combat-shy war-horse, the design of Operation Neptune Spear, to take out Osama, would have seemed so much like that Carter disaster.

A bunch of helicopters were involved here too, and don’t we know from experience how temperamental they can be.

Three of the eight sent to Iran broke down, and even after the operation was aborted, one rammed into a transport aircraft, leaving behind a carnage and eight dead soldiers.

A pucca, America-First Cold Warrior with a consistent record of risk aversion. That’s why sheep in sheep’s clothing. 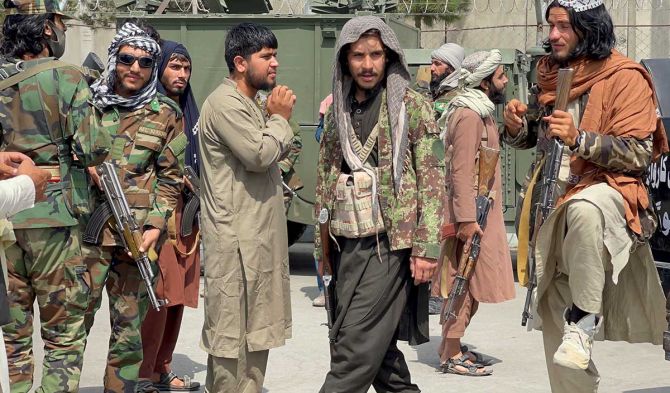 Check out his statements in the days leading up to the Kabul debacle and after.

None reflected these values for the Afghans.

‘We didn’t go to Afghanistan to nation-build’. Really?

Why didn’t you pull out under the Obama administration’s eight years? Or at least after Osama was killed?

For 16 years after 2004, the combined power of the US and its allies — including India, if I may add — was involved in nation-building.

Failed, you decided to leave. But without a deal? With no conditions?

Mr Biden said, don’t bother me with these questions when I have more pleasant things to think about, like the weekend.

Mr Ghani did act disgracefully, but who speaks like that about their own defeated ally? That after you had abandoned him?

He similarly spoke disparagingly of the Afghan army, which, over these two decades, lost almost 30 times the lives that the US and its allied forces did.

It was defeated rather easily in the end, but only when the US bolted after promising air support, reconnaissance, electronic intelligence, and maintenance of its air assets.

The Afghan army was left tactically blindfolded, without air cover and electronics though they had been trained by the Americans to fight in multiple dimensions like in a modern battlefield.

Even the contractors who should have stayed behind to maintain the air assets left.

The result: The Afghan air force was invisible in the decisive last days of fighting.

And now the Taliban have an entire armada of Blackhawk helicopters, close-support aircraft, and indeed thousands of Humvees, hundreds of thousands of rifles and machine guns.

What kind of a commander-in-chief leads a retreat like this? And yet be contemptuously dismissive of the whole thing? 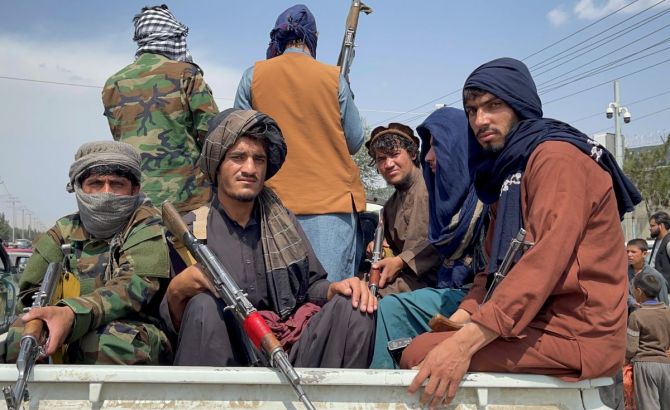 Until those human bombers blew up a hundred people, including US soldiers.

This was cruel on somebody so risk-averse that his aircraft were hovering over the battle zones but not risking providing support to the Afghan army, which desperately looked skywards in hope.

A frustrated Biden, whose disillusionment with American military power has been widely debated, was probably echoing the younger George Bush’s words: ‘We’ll smoke them out of their holes….’ It is just that these sounded hollow.

Here is one — probably most likely — scenario if Mr Biden decides to live up to his threat.

First, quickly ‘conclude’ it was only the Islamic State of Khorasan Province.

Then, identify some leader/leadership and their hideout and hit it with drones, or air power.

Any which way, he will need the help of Pakistan. There’s no other way.

For two decades the US paid in blood and blood money for dependence on Pakistan to carry out one president’s (Bush Jr) boast.

Now, having been defeated by its proxies, another president will go into Rawalpindi’s embrace to satisfy his constituents.

We know how easily stupidity can be a shared, bipartisan quality.

But where will Mr Biden’s US go next after it has killed the current ISKP chief?

Because there will be another soon enough.

Afghanistan will be back to being the global nursery of Islamic extremism.

Anybody who thinks the Taliban, under the tutelage of the Pakistanis, will be able to secure a nation-State as amorphous as this against highly indoctrinated groups, is erring gravely.

Will this again resume the same old vicious cycle: Pakistan as the stalwart ally in the war on terror, which it makes you lose in the end? 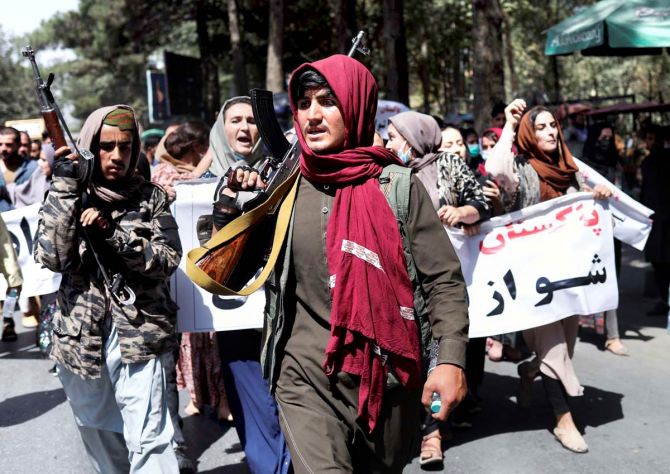 It may not hurt Mr Biden’s voters at home too much.

As we saw with Mr Trump’s numbers even in defeat, the ‘base’ is enormously forgiving towards its leader.

But it will greatly hurt the American self-image of power.

All US allies, including India, have been jolted.

If this is all it takes for it now to cut and run, cursing and blaming an ally under fire, how would a Taiwan, Japan, or South Korea count on it against the Chinese? Or even India.

What is the Quad worth then if not another fancy, periodic naval parade or spectacle?

Whatever Mr Biden might or might not do to the terrorists who bombed Kabul, he’s surely turned global strategic thinking inside out.

By Special Arrangement with The Print