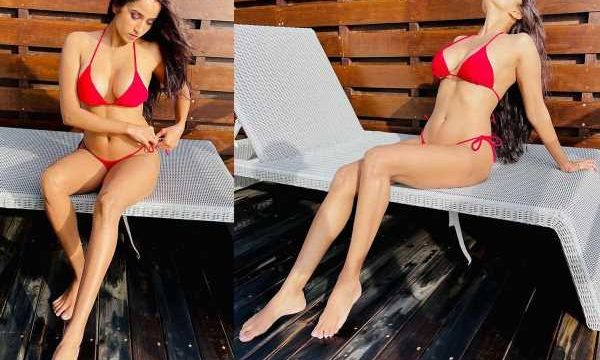 Pooja Bhalekar makes her debut in the Indian film industry with Ram Gopal Varma‘s Enter The Girl Dragon. She is  a trained martial artist . The actress  was born and raised in Mumbai. She was interested in acting from a very young age. During her college days,  Pooja started modeling and also started giving auditions.

The actress came to the limelight after RGV announced that Pooja Bhalekar will play the female lead in  Indo-Chinese film titled “Enter The Girl Dragon”. She  underwent intensive training sessions and learn various martial arts tricks as well to prepare for her role in the film.   Pooja Bhalekar is also one  of the active user of the social media sites and she took to her Instagram to share a series of pics, where she is seen wearing two piece red bikini.

Her fans are showering praises on her h*t figer. One of her fan said: H*tness queen. Another netizen said:  Gorgeous and s*xy lady.

Promoted as India’s First Martial Arts Film, the promos of the action-thriller Varma’s Enter The Girl Dragon managed to strike the right chord with the netizens.  The movie revolves around the love triangle between the female lead, her boyfriend and her inspiration towards martial arts.