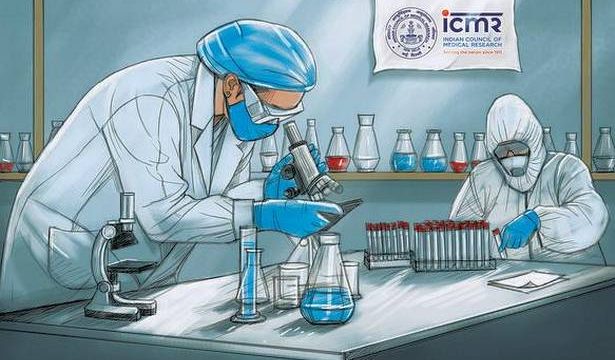 The govt.-funded body that has been at the centre of the fight against the virus is under the spotlight as a second wave is sweeping through the country

As India is in the middle of a crisis with attention almost entirely focused on putting out the fire, it will be a while before some serious soul searching begins on how those at the helm of the country’s COVID-19 management strategy failed to gauge the size and impact of the second wave. While analysts, in the future, may attribute faults to various actors such as the political leadership and state administrators, an organisation that is certain to come for reckoning is the Indian Council of Medical Research (ICMR).

As an apex council of government-funded medical research institutions that has expertise in a range of infectious-disease analyses and with experience that stretches back well over a century, it was natural that the ICMR has been playing a pivotal role in India’s defence against the coronavirus. One of its labs, the Pune-based National Institute of Virology (NIV) that traces its origin to 1952, sequenced the virus in February 2020, almost as soon as the genome sequence of the virus was made globally available by China.

The first COVID-19 patient in India, a medical student who returned from Wuhan, was laboratory-confirmed by the NIV on January 30. Two more adults from Kerala were also confirmed positive within a few days. The lab developed the assays needed to detect the presence of the virus by targeting specific regions of its genome. Soon enough, the organisation was able to grow the virus in the lab, a necessary step to being able to develop a vaccine. This strain was eventually transferred to the Hyderabad-based Bharat Biotech from which Covaxin eventually came to be.

Infectious diseases lie at the heart of the conception of an organisation such as the ICMR. It has, over the years, nurtured several laboratories and research organisations with niche expertise in several other aspects of disease spread. Given its history, it was expected that the NIV would play a prominent role in tackling the virus. The ICMR’s institutes have expertise in tuberculosis, leprosy, cholera and diarrhoeal diseases, viral diseases including AIDS, malaria, kala-azar, vector control, nutrition, food and drug toxicology, reproduction, immuno-haematology, oncology and medical statistics.

One of these is epidemiology or the study of how infectious diseases spread in a society. Enter the National Institute of Epidemiology (NIE), an ICMR research body based in Chennai.

Again in February 2020, epidemiologists of the NIE, along with other scientists of the ICMR and experts from the Imperial College in London, wrote in the Indian Journal of Medical Research, published by the ICMR itself, that a coronavirus (COVID-19) epidemic in India “was inevitable” and the most aggressive airport screening would have delayed India’s first 1,000 cases by at most 45 days. India’s health system should have focused early on finding transmission in the community and quarantining, instead of border control. This report became public a day after India had closed its airports to international passengers and a day before Prime Minister Narendra Modi imposed a national lockdown.

Though that report lacked detail on what the projected number of affected could be or what the probable mortality rate from being infected was likely to be, it said, in as measured a tone, that the virus was unlikely to treat India any different from other countries in the world. This was around the time that Europe’s health systems had buckled under the weight of the coronavirus, and China — after being assailed — had imposed a stringent lockdown.

In May last year, the organisation undertook another important endeavour. The NIE epidemiologists conducted what was perhaps among the largest such serology surveys in the world. These involve choosing groups of adults across a representative number of districts and testing blood samples for the presence of antibodies that generally form within two-three weeks of an infection.

The serosurvey found that from its analysis of 69 districts across 21 States suggested that an estimated 7,00,000 may have been infected by the SARS-CoV-2 virus in these districts even in early May. This was when the official count was around 35,000.

However, for all its expertise, resources, institutional memory and geographical spread — it has 26 national institutes and six regional research centres to investigate and recommend policy measures for a range of communicable and non-communicable diseases — its critics say the ICMR is an extremely bureaucratic organisation. Being almost entirely dependent on government funds, its scientists do not have the independence to share their knowledge and expertise without being overtly controlled by the government in power and this was on display through the pandemic.

In the early days of the pandemic, the ICMR leadership, in spite of the evidence being proffered by its own scientists of the cataclysm that was emerging, sought to play down — and actively encouraged the impression — that India would not see the kind of devastation the pandemic had wreaked on many other countries of comparable size. While it exhorted the public to mask up and follow COVID-19 appropriate behaviour, it was rarely forthcoming or extremely tardy with results and analysis of investigations into the course of the pandemic.

Independent scientists recently petitioned Prime Minister Narendra Modi to get the ICMR to be more forthright with sharing data. As a government organisation, the ICMR has access to a trove of medical data, patient history, test results from surveys and much of these, if made available more widely, would have aided a better understanding in the trajectory of the coronavirus, these scientists say. Currently, the NIV, along with some other labs, is in the process of checking if Covaxin provides protection against newer strains of the virus.

India has expertise in making vaccines but limited expertise in conducting large Phase 3 trials that can assess vaccine or drug efficacy. The ICMR was a partner of Bharat Biotech but so far, the organisation has not released a proper peer-reviewed journal describing the Phase 3 trials. This, after the company was given emergency use authorisation without such efficacy trials being complete and ICMR Director-General Balram Bhargava was found to have been goading clinical trial investigators, last year, into readying a vaccine before Independence Day in August. Currently, India is in a pandemic nightmare without enough vaccines and the ICMR is largely silent on the evolution of the second wave. What portion of the blame it must shoulder will be known only in the years ahead.