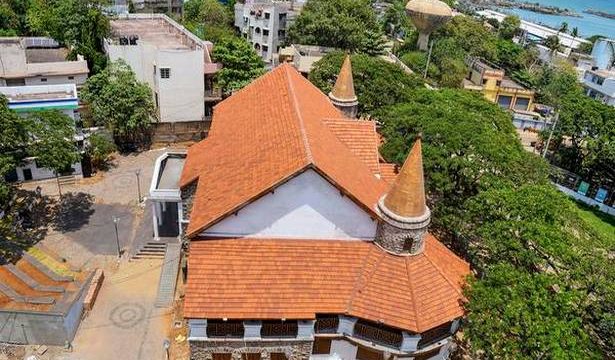 Renovation project carried out at a cost of ₹15 crore

The silent corridors of the 120-year-old Town Hall are finally shining bright after decades of being clouded under apathy and neglect. The much-awaited Town Hall renovation project is nearing completion.. Upon completion, the well-lit halls and sections of the iconic heritage structure are expected to shed light on a significant chapter of the city’s past.

With the renovation projects of the Town Hall and the adjacent Old Municipal Building nearing completion by the Greater Visakhapatnam Municipal Corporation (GVMC), officials are now planning the next phase to reopen the two structures to the public.

GVMC Commissioner G. Srijana told The Hindu that a final plan is being drawn up for both the heritage structures. “The idea is to make the entire place a no-vehicle zone and keep the parking area on the main road and close the back gate to seal the thoroughfare. We plan to convert the Town Hall into a museum that reflects the colonial history of Visakhapatnam and develop the Old Municipal Building as a venue for hosting art events, exhibitions and workshops,” she said.

The renovation project of the two buildings was carried out at a cost of ₹15 crore and was executed by Savani Heritage Conservation Pvt. Ltd. A most significant part of the project is the scientific approach in restoring several parts of the dilapidated structure with materials that are in sync with the original materials used.

“Three types of materials were mainly used in the restoration process—lime plastering, teakwood work and Mangalore tiles. Only for the flooring, we had to use epoxy instead of the original Indian Patent Stone (IPS) flooring. This was because if we had to remove the IPS flooring and redo it again, that would have hugely impacted the structure. So we decided to go with a lighter type of flooring with three-millimetre thickness,” said Jitesh Kumar, project manager, Savan.

Both the heritage structures have an amphitheatre designed outside the entrance. The biggest hall of the Town Hall facing the back gate has unique eight-foot-long hanging lights, possibly used for the first time in a heritage structure.

“The amphitheatre was not part of the original plan. Having spent many years in Delhi, I wanted to replicate the Purana Qila vibes here by having a space like an amphitheatre where cultural events showcasing the rich tradition of Andhra Pradesh can be hosted in the backdrop of the magnificent Town Hall structure,” said Ms. Srijana. This apart, there are plans to utilise the water tank area — which has also been given a facelift — into a play area and sand pit for kids. “We expect to open up the heritage structures to the public by August and have written to the State Dept. of Museums and INTACH to support us in creating a museum,” she added.

Interestingly, the Town Hall still has the original billiards table dating back to the 1910s from the British times with a cue and scoring board on the wall that belonged to the Vizagapatnam Club. “The whole place was covered under a heap of junk from the late 1960s,” said Jayshree Hatangadi, a history narrator who has been conducting heritage walks in the city for years. “Vizag has a rich colony history that can be documented though letters, old photographs, postcards, drafts that also showcase the history of the port and cyclones of the region. The winding corridors of the Town Hall can be an excellent space to have an interactive museum,” she added.