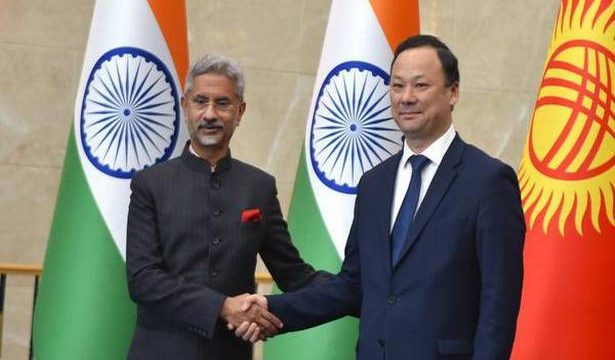 Mr. Jaishankar arrived here on Sunday as part of his four-day visit to Kyrgyzstan, Kazakhstan and Armenia with an aim to further expand bilateral ties with the three Central Asian countries.

India on Monday agreed to a $200 million Line of Credit support for development projects in Kyrgyzstan, as External Affairs Minister S. Jaishankar held "cordial and constructive" talks with his Kyrgyz counterpart Ruslan Kazakbaev on a wide range of bilateral and global issues, including Afghanistan.

Mr. Jaishankar arrived here on Sunday as part of his four-day visit to Kyrgyzstan, Kazakhstan and Armenia with an aim to further expand bilateral ties with the three Central Asian countries.

During the meeting, Mr. Jaishankar also held discussion on the evolving situation in Afghanistan.

"India and Kyrgyz Republic have a shared approach to developments in Afghanistan," he said in a tweet.

"Very pleased to gift Indian epics and classics to the Manas-Mahatma Gandhi library in Bishkek. Applaud the leadership of Prof. Turgunaliev in strengthening our cultural cooperation," he tweeted.

During his stay in Kyrgyzstan, Mr. Jaishankar will also call on President Sadyr Japarov.

"This will be his first visit to the country as the external affairs minister," the Ministry of External Affairs had said, adding that some agreements are also expected to be signed during the visit.

Mr. Jaishankar will be in Kazakhstan from October 11 to 12 to attend the 6th Ministerial meeting of the Conference of Interaction and Confidence Building Measures in Asia (CICA), the MEA said.

Mr. Jaishankar will visit Armenia on October 12 to 13 during which he will have meetings with his Armenian counterpart Ararat Mirzoyan and call on Prime Minister Nikol Pashinyan.

Mr. Jaishankar’s three-nation visit will be a continuation of India’s increased engagement with countries in its "extended neighbourhood", according to the MEA.

It is learnt that the developments in Afghanistan are expected to figure prominently in Mr. Jaishankar’s talks with leaders of the three central Asian countries.