In a recent interview, Prime Minister Narendra Modi accused the United Progressive Alliance (UPA) II government of having left the economy in a terrible mess. Modi said: “The details about the decay in the Indian economy were unbelievable. It had the potential to cause a crisis all over. In 2014, industry was leaving India. India was in the Fragile Five. Experts believed that the ‘I’ in BRICS would collapse…There were several landmines laid in various sectors. We accepted this uncomfortable truth and hit the ground running from the very first day to stabilise things so that the Indian economy can be strengthened for the long haul…The positive results of our approach are for everyone to see. Today, India is the fastest growing large economy of the world with strong fundamentals to propel further growth.”

It is true that a large part of UPA II’s tenure was marked by deceleration in growth, rising inflation and fiscal deficit, and worsening of the external balance situation. It is also true that the process of economic recovery and regaining macroeconomic stability started during the last phase of UPA II itself. This is evident from trends in indicators such as GDP growth, current account deficit as percentage of GDP, inflation and fiscal deficit. (see chart below) 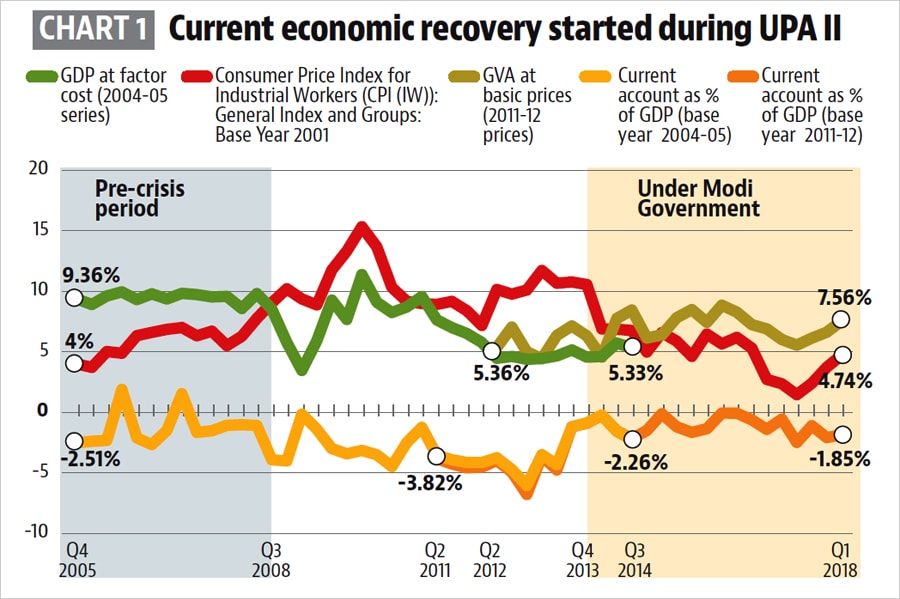 What is often not appreciated is the fact that the primary trigger for economic problems in the latter phase of UPA II had its roots in economic rather than political factors, although the latter may well have exacerbated the situation. The first UPA government presided over India’s best ever growth period. Investment and export boom were the major tailwinds driving this process. With the global economic crisis giving a body blow to purchasing power across the world, export growth started decelerating. Low export growth, weakening of global commodity prices and unfavourable judicial decisions in corruption cases annulling many government auctions in capital intensive industries led to a stalling and subsequent decline in investment activity and eventually economic growth by the end of last decade.

These developments had a major role in creation of the bad loan problem which ails the Indian banking system today. This decline in growth came just after India, like many other economies, had loosened fiscal strings to provide a stimulus to economic activity in the wake of global economic slowdown. Worsening fiscal situation along with decelerating growth further spooked international investors and worsened problems on the external account.

A policy reversal in the form of control on fiscal deficit and increase in interest rates was implemented to tide over the crisis in the last phase of UPA II. While it helped in restoring macroeconomic stability, the incumbent government had to pay a political cost due to worsening of farm incomes (real Minimum Support Prices fell sharply), a cutback in welfare spending, and the overhang of corruption cases. The next government continued with the policy of fiscal consolidation and it was helped in this pursuit by falling oil prices, which allowed a windfall gain in revenues and cheaper imports. With oil prices rising once again, pressures on both the fiscal and external account front are beginning to reappear.

Political positioning vis-à-vis such cyclical movements depends on whether one is in the opposition or the government. The Congress’s present jibes against the BJP regarding petroleum prices and fall in rupee’s value are not very different from what the BJP used to indulge in before May 2014. Such polemics however, are of little use in trying to answer the fundamental macroeconomic challenge facing the Indian economy today: if India has to place itself into a long-term double digit growth trajectory, what is going to be driving this move?

Elementary macroeconomics tells us that GDP growth can be driven by four factors: private consumption, investment, government spending and net exports. A surge in protectionist tendencies across the world, especially in the US, has put the international trade order in serious jeopardy. This has significantly increased the unreliability of exports in India’s future growth. As the Indian economy becomes bigger, the ability of government spending to provide stimulus to the economy will increasingly come under pressure. A sustained investment boom by its very nature requires either an export boom or a consumption boom which would justify production of more and more capital goods. Although investment in infrastructure is a bit independent from this constraint it is unlikely to be a major contributor to growth on a standalone basis. This leaves us with private consumption which still accounts for more than 55% of India’s GDP. Notwithstanding its major contribution to economic growth, private consumption also has an in-built problem in India’s case. Here’s why.

Consumption demand of the well-off is more likely to have strong import content. The rich spending more will mean a greater demand for expensive electronic goods and luxury items while the poor are more likely to demand things such as domestically produced textiles. For similar levels of consumption inequality, import propensity of consumption expenditure increased after the liberalisation of the economy in 1991 as import restrictions were removed. This is borne out from the fast rise in trade deficit as a share of GDP during the economic boom under UPA I. Even though exports were rising during this period, imports grew at an even faster rate. (see chart below) Without a concomitant rise in exports, any such growth phase is bound to create a crisis on the external account. India has been able to salvage this problem thanks to the remittances it receives from its workers in other countries. Whether or not remittances will be able to carry on a similar role in the medium to long-term is an important question.

A consumption boom need not be import inducing if it is driven by the not so well-off sections of the population. This however will require a quantum jump in incomes of the masses. A majority of India’s workforce is still employed in subsistence farming. Unless farm incomes rise significantly or those employed in agriculture can be shifted into better paying jobs, this is not going to be an easy task. This underlines the fundamental importance of rural transformation in India’s growth challenge.

Harry and Meghan ‘was like working for a couple of teenagers’, claims new bombshell book