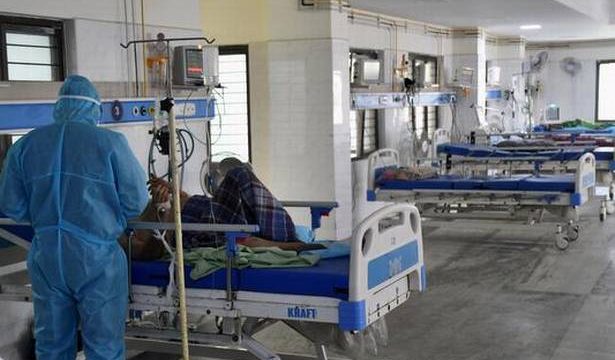 India on Wednesday announced its first death linked to Omicron, the highly transmissible variant of coronavirus.

Joint secretary of the Union Health Ministry Lav Aggarwal said the death of a person with comorbidities, including diabetes, had been reported from Rajasthan and this was “technically” a Omicron-related death.

The 73-year-old, who was found infected with Omicron in genome sequencing, had tested negative for the infection twice. He died in a Udaipur hospital on December 31, due to post-COVID-19 pneumonia coupled with comorbidities—diabetes mellitus, hypertension and hypothyroidism.

He tested positive on December 15 and has been in hospital since then. He was fully vaccinated with no significant contact and travel history. His genome sequencing results came in on December 25 and he was found to carry the Omicron variant. He died six days later around 3.30 a.m, a Health Ministry official confirmed.

Editorial | Prepare for the worst: On Omicron response

The country’s Omicron count breached the 2,000-mark after multiple States, including Maharashtra, confirmed fresh cases in the previous 24 hours. According to the Union Health Ministry, a total of 2,135 Omicron cases have so far been detected in the country, of which, as many as 828 have recovered.

At the weekly press conference, the Ministry indicated that the surge in COVID cases was a matter of concern.

Mr. Agarwal said India had reported a 6.3 times increase in the number of new cases in the last eight days. The case positivity had risen from 0.79 % on December 29 to 5.03% on January 5, while 65.9% of the adult population had been fully vaccinated so far. Vaccination of those aged between 15 and 18 that started on January 3 has so far seen one crore people taking their first dose. This cohort has 7.40 crore individuals as per government records.

At the weekly conference, Indian Council of Medical Research head Dr. Balram Bhargava said Omicron was now the predominant circulating strain in cities and all mass gatherings should be avoided.

He also cautioned that drug Molunupiravir is not part of the national taskforce treatment protocol. “We are still looking into the drug,” he said. The drug recently got emergency use authorisation from the Drugs Controller General of India.

Speaking about the booster or precautionary dose, Dr. V.K. Paul, member (Health), NITI Aayog, stated that the persons eligible for the same would receive the same vaccine as the previous two doses.

Though there was a surge in cases, the hospitalisation rate was so far much lower than the 20% seen during the last wave, he said. He, however, warned against being complacent.

Dr. Arvinder Singh Soin, liver transplant surgeon, said: “Omicron may well end up being milder in terms of disease severity but with such increased transmissibility — and healthcare workers out sick — the burden on our hospitals will not be as mild”.

Seconding this, Chief Scientist, World Health Organisation, Dr. Soumya Swaminathan, tweeted: “Omicron is not common cold! Health systems can get overwhelmed. Important to have systems to test, advise and monitor large number of patients as the surge can be sudden and huge.’’