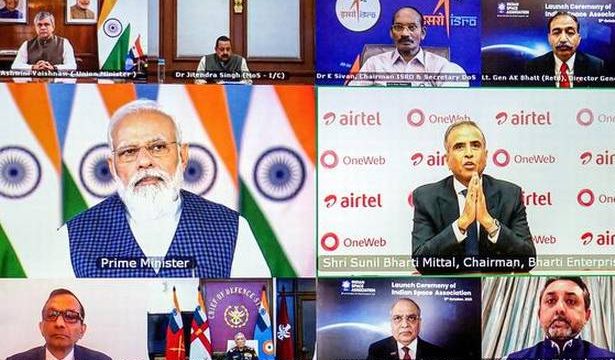 Industrialists told Prime Minister Narendra Modi on Monday that for the space industry to grow, the Government should help small and medium sector enterprises (SME) access more capital as well as move faster on finalising its space policy.

The industry leaders were speaking at the inauguration of the Indian Space Association, an organisation meant to represent the interests of the Indian space sector with government and private sector bodies across the board including the Indian Space Research Organisation, Walchandnagar Industries, TATA Nelco, Pixxel, Mapmy India and Bharti Airtel.

In his address, Mr. Modi said his government was “the most decisive one in history” and that in sectors where the government “wasn’t needed” the private sector ought to be stepping in. He cited the example of the recent decision of the government giving up its stake in Air India to a Tata group company.

The government’s approach to space reforms, Mr. Modi said, is based on four pillars. First, the freedom of innovation to the private sector. Second, the role of the government as an enabler. Third, preparing youth for the future. And fourth, to see the space sector as a resource for the progress of the common man. This translated to better mapping, imaging and connectivity facilities for the common people.

Also, the space sector implied better speed from shipment to delivery for entrepreneurs, this also means better security and income for fishermen and better forecast of the natural calamity, he added.

Chirag Doshi, Managing Director and CEO, Walchandnagar Industries, said deeper engagement with academia, industry and government for research and development in space sector was needed and that “opportunity” for SMEs to work closer with Finance Ministry to get better financing was the need of the hour.

P.J. Nath, MD& CEO, of NELCO, a Tata group company, said the Centre should move to quickly finalise the new space policy as it would help with planning for investments.

“Some policies don’t help fully realise potential, for example, the maritime policy doesn’t allow (private sector) to supply services to fisheries,” Mr Nath said. He also requested flexibility for satellite frequency users to use any frequency range and to be able to freely buy technology from abroad.

Rohan Verma, CEO, MapmyIndia urged the Prime Minister to help install his company’s mapping software in every phone as it would mean the promotion of an “indigenous innovation”.

Ahead of major launches next year, India has announced its intent to liberalise the space sector and have more private companies use the facilities of the ISRO for developing as well as launching satellites. While there have been drafts of a new space policy, these are yet to take shape.