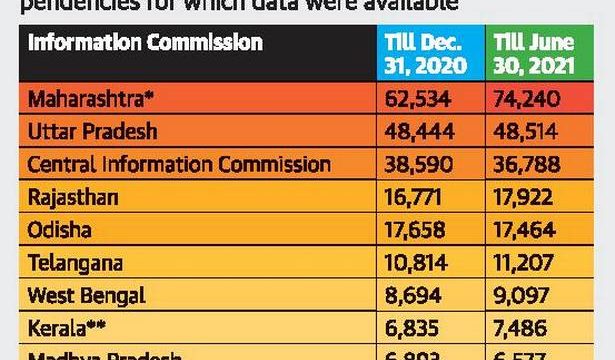 They will take at least a year to dispose of appeals, says study

Sixteen years after the RTI Act came into force on October 12, 2005, it is a tool for citizens to demand accountability in governance, with an estimated 40 lakh to 60 lakh RTI requests being filed every year. When a request for information is denied by a government body, however, appeals are filed in the Central and State Information Commissions which act as transparency watchdogs under the law.

The SNS report documented the performance of these commissions, highlighting the delays in disposing of cases due to both shortage of personnel and inefficient operations. A complaint filed in Odisha on July 1, 2021 would take six years and eight months to be disposed of, the longest among States. The Central Information Commission itself would take a year and 11 months to dispose an appeal, although it has reduced its backlog to 33,742 since filling four of its vacancies almost a year ago. However, the CIC still has three vacancies left and has not functioned at its full strength of 10 Commissioners and one chief for almost five years.

Defunct in some States

The situation is worse in States such as Jharkhand, where the commission has been completely defunct for 18 months when the last Commissioner completed his tenure. The commissions of Meghalaya and Tripura have also been defunct for seven and three months respectively and at least three more commissions are headless.

“The need to scrutinise the functioning of Information Commissions now is perhaps greater than ever before, given the unprecedented crisis gripping the nation due to the COVID-19 pandemic. An assessment of the functioning of the transparency watchdogs revealed that 21 out of 29 commissions in the country did not hold a single hearing during the first three stages of the national lockdown imposed in 2020,” said the SNS report.