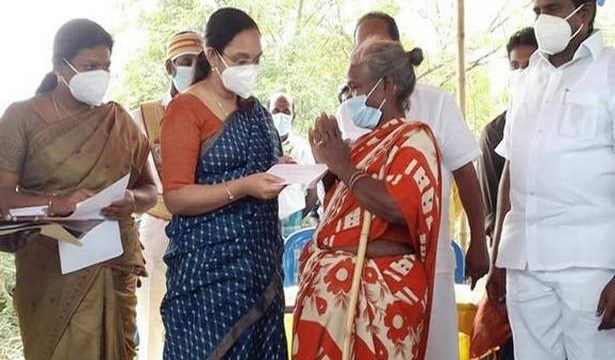 Kancheepuram Collector issues documents; livelihood support, too, to be given

It was a day that residents of Nariyamputhur, an Irula settlement in Uthiramerur taluk, will not forget soon.

As Kancheepuram Collector M. Aarthi presented them with pattas in their names, they laughed and cried at the same time: this is how an official described their state.

Panchali, who lives with her husband, said she had no idea as to what was happening.

“A group of officials suddenly descended upon our village and told us we will get homes. They spoke to each of us, asked about our families and put up a shamiana and presented the patta documents,” she said.

The residents have now moved to an adjacent plot so that the Slum Clearance Board can construct individual homes for them. The foundation stone for the same has been laid.

Ms. Aarthi said the district administration would carry out a survey of all the Irula habitations in Kancheepuram and draw up a comprehensive programme under which they would be provided housing and livelihood support.

“Along with the houses, we will provide a cattle shed or goat pen since they are rearing goats. We have also told them that they can ask us for any assistance, including for the education of their children,” she said.

DRDA Project Director P. Jeyasudha said the funds for the houses would be released by the Slum Clearance Board and construction would be carried out by the DRDA. The aim is to complete work before the monsoon, she added.

The Hindu had carried a story on their condition a week ago following which several persons came forward with donations of rice, provisions and vegetables. The pattas for Vandivakkam are under process.

Padmapriya Baskar, Sanitation First India, who was the first to provide them with provisions, said her NGO was willing to construct eco-san toilets for the villagers.

A group of old students from Kilpauk Medical College Chennai Alumni Association have come forward to help the children with their education.

Similarly, a hotel owner, Kurinji selvan, too, provided them with cooked food and rice and provisions.

T. Deepa, a member of the State Women’s Commission, said she would like to work along with the district administration to support the community.

Samuel Pradeep Raja, secretary of Care Trust, said that slightly larger homes would be needed for these people since they were used to living as joint families.

“If each house is around 400 sq ft, it would be helpful. Even recently, Health Minister Ma. Subramanian had announced in the city that Slum Clearance Board tenements would be double their usual size. The same principle can be applied here,” he pointed out.