The Health Ministry committee also found that J&J reported 121 “serious” adverse events to CDSCO from January 2014 to June 2017. But, the report says, “only 48 of such reports are available with CDSCO”.

Two out ten patients, who reported adverse reactions to “faulty” hip implants manufactured by a subsidiary of Johnson & Johnson and underwent revision surgeries were under the age of forty; severe pain in the hip, inability to walk, destruction of bone and deposition of harmful metal debris of the implant inside body tissue, are the reasons behind the revision surgeries.

These are among the key findings in the medical device adverse reports of patients submitted by Johnson & Johnson to the Central Drugs Standard Control Organisation (CDSCO), the national pharmaceutical and medical devices regulator.

Medical device adverse event reporting is crucial data, related to suspected device associated deaths, serious injuries and device malfunction. Under the rules, it is mandatory for the manufacturer to report such events to the CDSCO. Based on these reports, the regulator detects potential device-related safety issues and is also relied upon to recall devices from the market.

On August 24, The Indian Express reported the key findings of a committee set up by the Union Health Ministry on these medical devices, which concluded that the company “suppressed” key facts on the harmful aftermath of hip replacement surgeries conducted on hundreds of patients using the implants it imported and sold.

The Health Ministry committee also found that J&J reported 121 “serious” adverse events to CDSCO from January 2014 to June 2017. But, the report says, “only 48 of such reports are available with CDSCO”.

J&J imported and sold ASR XL Acetabular Hip System and ASR Hip Resurfacing System in the country until they were globally recalled in 2010.

The adverse reports, filed by global Pharma major J&J also reveal that doctors red-flagged the faulty implant, remarking that adverse event reports were “device related”. The adverse reports also reveal that while the company initiated the reimbursement programme across the globe to conduct revision surgeries in 2010, in India, the revision surgeries started only in 2013.

J&J did not respond to queries sent by The Indian Express. 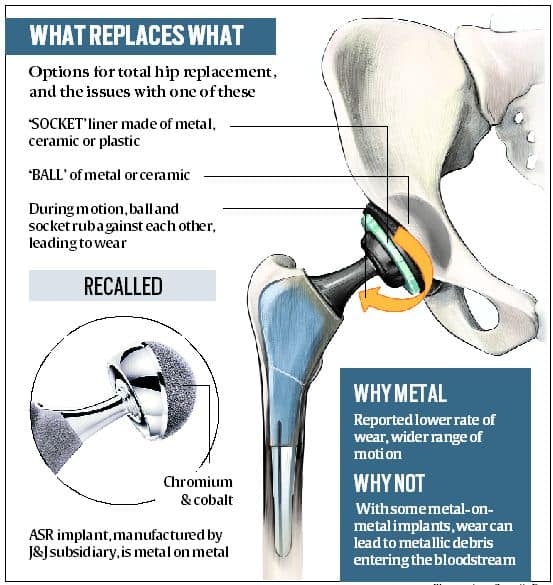 The Indian Express analysed 50 serious adverse reaction (SAR) reports filed by J&J to the CDSCO on the ASR hip implant and found that that fifty per cent of the patients who had experienced SAR and had undergone revision surgeries due to ‘severe pain’ were under fifty years of age.

Key findings in the adverse reports:

* A hip implant is usually considered to last up to 15 years. However, data reveals that 32 per cent of patients, who reported adverse events and underwent revision surgeries were in the age group of 40-50. 20 per cent of the patients, who underwent revision surgeries, were under the age of 40 years; and the youngest patients to report adverse reaction were two 32-year-old males.

*In the majority of cases, doctors have remained silent on the revision surgery. But, two doctors explicitly remarked saying they believe that “the event is device related”.

* The symptoms reported due to adverse reactions are: severe pain, difficulty in walking, limping, metal debris on both hips, osteolysis (destruction of bone tissue) and hip replacement component loosening.

* The oldest case is that of a 49-year-old woman, who underwent the hip replacement in July 2004. But revision surgery took place ten years later in 2014. Also, in another case, a 40-year-old man had to undergo a “two-stage revision surgery”, after he had “severe pain in left hip and osteolysis in acetabular side”.

Poco F1 review: Xiaomi’s sub-brand has a lot of hype, but does it perform?

RK Studio – A look back

Pollution levels drop a bit in Delhi: News in Numbers

Did Japan just beat coronavirus without lockdowns or mass testing?