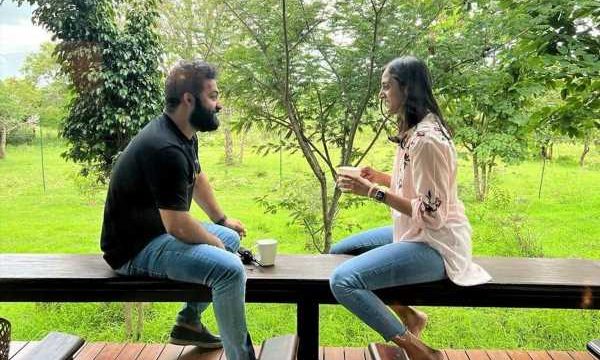 Young Tiger Jr NTR took to his Instagram and  shared a lovely pic of him with his wife Lakshmi Pranathi. And he captioned it, “Moments like these…..”

Coming on the pic, both husband and wife Jr NTR and wife Lakshmi Pranathi are sitting on a bench amidst the beautiful surroundings. They are just casually sitting face to face and having a conversation. They are enjoying a great time in a peaceful place. This pic has been garnering huge likes and comments.

On May 5, Jr NTR and Prashanth Neel celebrated their wedding anniversaries together with their wives Lakshmi Pranathi and Likitha, respectively. Tarak also shared pics from the anniversary party on Instagram.

Jr NTR tied the knot with Lakshmi Pranathi in 2011.  She is the daughter of realtor and businessman Narne Srinivasa Rao. They were blessed with their first child, Nandamuri Abhay Ram, in 2014. Their youngest son, Nandamuri Bharghav Ram was born in  the year 2018.

Tarak was last seen playing the lead role in RRR, which was helmed by SS Rajamouli and it was a blockbuster at the box office. Now he is all set to start the shoot of his next which will be directed by Koratala Siva. He has also teamed up with Prashanth Neel for a Pan Indian film.