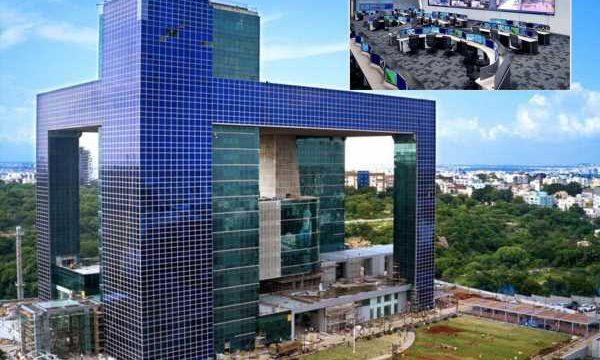 The chief minister of Telangana, K.Chandrasekhar Rao is going to inaugurate the state of art Command and Control Centre of the Telangana State Police tomorrow. The Centre is erected at a cost of Rs 600 crore. Some of the delegates like Cinematography minister T Srinivas Yadav, Director General of Police M Mahender Reddy, City Police Commissioner CV Anand and Home Minister Mohammed Mahmood Ali have visited the Centre for a final assessment.

The inaugural ceremony will be graced by several VIPs and the necessary arrangements for the ceremony were also made by ministers. For the sake of protection, about 9.22 lakh cameras were installed across Telangana and community CCTV projects will be connected to the centre, with the police to be able to monitor the check around one lakh cameras at any point of time.

A war room will be a component of the building, which has been designed to house technology teams working in back-end operations to support field policing. It will also act as a Disaster and Crisis Management Centre housing all related government departments. Including other technology-driven policies introduced by the state police, separate space has been left for artificial intelligence, data analytics and social media units.