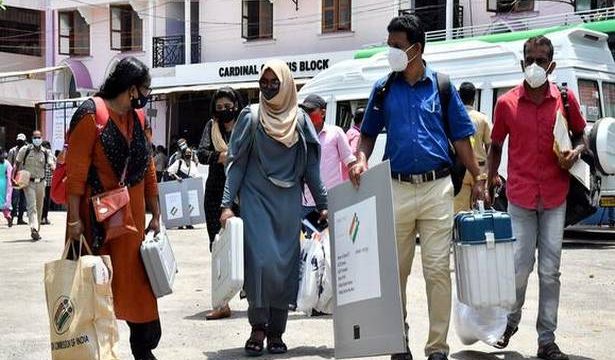 About 2.74 crore voters exercising their franchise to decide the fate of 957 candidates.

After weeks-long stormy campaign sessions, marathon rallies and mammoth road shows, Kerala is all set to go to polls on Tuesday.

A tight security blanket has been thrown over the State which is holding elections to the 140 Assembly segments as well as a by-election to the Malappuram Lok Sabha seat. The ruling CPI(M)-led Left Democratic Front (LDF) is seeking a second innings in the State.

As many as 2.74 crore voters will exercise their franchise to decide the fate of 957 candidates, including high-profile leaders and independents, in 140 Assembly constituencies across the State. Kerala has over 2.74 crore electors, including 1.41 crore women, 1.32 crore men and 290 transgender voters.

Mock poll is underway at the polling stations in Kerala ahead of the single-phase Assembly elections to 140 constituencies. The exercise is being held in the presence of the booth agents of the candidates.

Actual polling will open at 7 a.m. and close at 7 p.m. across the State, except in nine constituencies in three north Kerala districts where it will close at 6 p.m. on account of threat posed by Left Wing Extremism. – Tiki Rajwi

Police, CAPF deployed in full force in State, along borders

Security has been beefed up in the State in view of the Assembly elections on Tuesday.

Deployment of State police and Central Armed Police Forces (CAPF) have been completed and heightened vigil ensured along the State borders, State Police Chief Loknath Behera said. Ninety-five companies of the police have been deployed across the State in view of the polls.

Attempts to cast multiple votes or impersonate another voter during the Assembly elections on Tuesday will attract stern action, election officials warned on Monday.

Such offences are punishable with imprisonment up to one year or a fine, or both, under relevant sections of the Indian Penal Code, they said.