PM Modi undertook an aerial survey of the flood-affected districts in the state and announced funds worth Rs 500 crores. Kerala CM Pinarayi Vijayan had originally requested the central government to dispense Rs. 2000 crores for rehabilitation of the flood victims.

With the death toll touching 173 in flood-ravaged Kerala, Prime Minister Narendra Modi Saturday chaired a high-level meeting in Kochi and announced an additional relief of Rs 500 crore, aside from the Rs 100 crore granted by Home Minister Rajnath Singh last week. He also declared compensation for victims’ kin and injured. The meeting was also attended by other dignitaries, including state chief minister Pinarayi Vijayan and Union Minister Alphons KJ.

Kerala chief minister Pinarayi Vijayan had requested an immediate assistance of Rs 2,000 crore from the Centre. In a meeting convened to assess the flood situation in the state, CM Vijayan had informed PM Modi that the state has suffered a loss of Rs 19,512 crore as per initial assessment.

On Friday, CM Vijayan informed Friday that the heavy rains, floods, and landslides have killed a total of 324 people since the onset of monsoon in May. Over 82,000 people were rescued on Friday as multiple rescue agencies relocated people from flooded districts to relief camps.

The Hon’ble Prime Minister Narendra Modi announced an assistance of ₹500 crore. CM had requested an immediate assistance of ₹2000 crore. We express our thanks to Centre for the assistance. @PMOIndia @narendramodi

* The Centre announced a financial assistance of Rs 500 crore to the flood-ravaged state on Saturday. This is in addition to Rs 100 crore earlier announced by Union Home Minister Rajnath Singh last week. PM Modi also announced an additional financial assistance of Rs 2 lakh to the next kin of the deceased individuals, and Rs 50,000 to the victims who have been reported to be seriously injured. This allocation shall be made from PM’s National Relief Fund. The Kerala CM had demanded Rs 2,000 crore from the Centre. Vijayan reportedly told the PM that, based on first estimate, losses in the state are as high as Rs 19,500 crore. 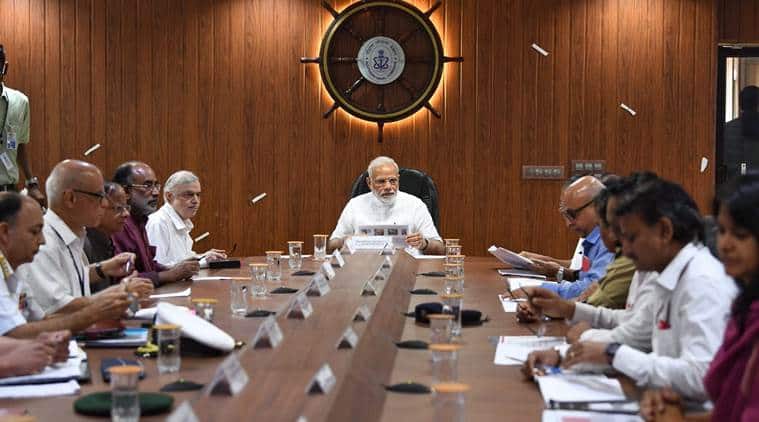 * PM Modi undertook an aerial survey of the flood-affected districts in the state. The survey was called off earlier today due to bad weather. The Prime Minister, who reached Kochi Saturday morning, is in Kerala to assess the damage and check the rehabilitation measures employed by the administration.

* Meanwhile, rains lashing several parts of the state since this morning is causing concern as it could hamper the rescue and relief operations. Chengannur in Pathnamthitta, Chalakudy in Thrissur and various other parts of Ernakulam district are among the worst hit where rescue efforts are likely to be concentrated today.

* United Nations chief Antonio Guterres expressed sadness over the situation in Kerala. In a statement, he said, “Our humanitarian colleagues, as well as the country team in India, have been following the recent floods very closely. The United Nations is of course saddened by the loss of life, destruction and displacement caused by floods in India.”

His spokesperson added, “India has quite a well-operated machinery to deal with natural disasters but of course our country team — I was in touch with our Resident Coordinator today — they’re following closely and they’re in touch with partners on the ground.”

* Kerala Chief Minister Pinarayi Vijayan tweets, “In a meeting convened to assess the flood situation in the State, CM Pinarayi Vijayan informed Hon’ble Prime Minister Narendra Modi that the State has suffered a loss of Rs 19,512 crore as per initial assessment. The Hon’ble Prime Minister Narendra Modi announced an assistance of Rs 500 crore. CM had requested an immediate assistance of Rs 2000 crore. We express our thanks to Centre for the assistance.” * Apart from the Army, Air Force, Navy and Coast Guard, there are 57 NDRF teams, comprising 1,300 personnel and 435 boats, conducting search and rescue operations in Kerala. There are five companies of BSF, CISF and RAF teams. A total of 38 helicopters have been deployed, and 20 aircraft are also being used for ferrying resources.

* The Finance Ministry asked public sector general insurance companies and LIC to take immediate action and nominate a senior nodal officer in Kerala for expediting settlement of all the claims reported in flood-ravaged Kerala. The Insurance Regulatory and Development Authority of India (IRDAI) has issued guidelines in the regard for both life and non-line insurance claims and asked them to report the progress.