The Indian Express looks at the Covid-19 immunisation exercise in states and UTs. 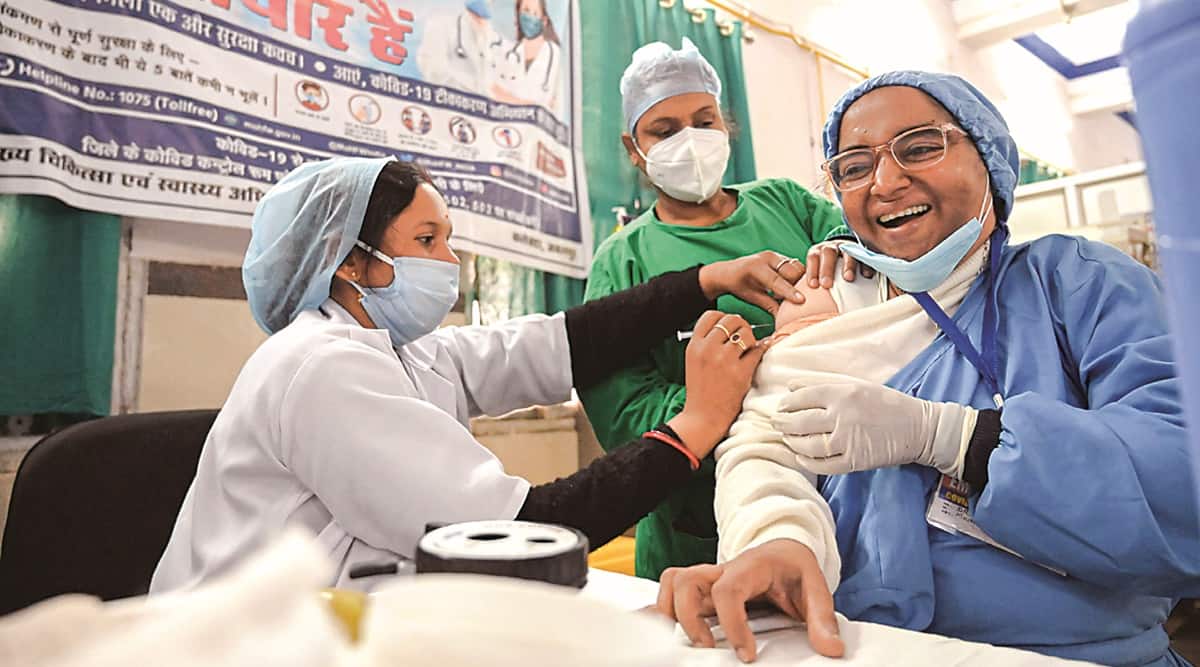 Of the 28,500 health workers who had been listed to get the vaccine on the inaugural day, Maharashtra recorded a turnout of 64.3 per cent. Of the 18,328 people vaccinated in Maharashtra on Saturday, 10 recipients suffered mild reactions including nausea, vomiting, and anxiety. Hingoli recorded the highest turnout—100 per cent—while Mumbai had the least at 48.5 per cent. Owing to technical glitches in the CoWIN App platform in Mumbai, the Brihanmumbai Municipal Corporation suspended the vaccination drive for two days on Sunday and Monday, until the wrinkles in the system are ironed out. The problem was experienced across the state, and details of those who got the shot had to be entered manually. State Health Secretary Pradip Vyas said that the problem was triggered due to a bug in the Co-WIN app on Friday. “But now it has been resolved.” 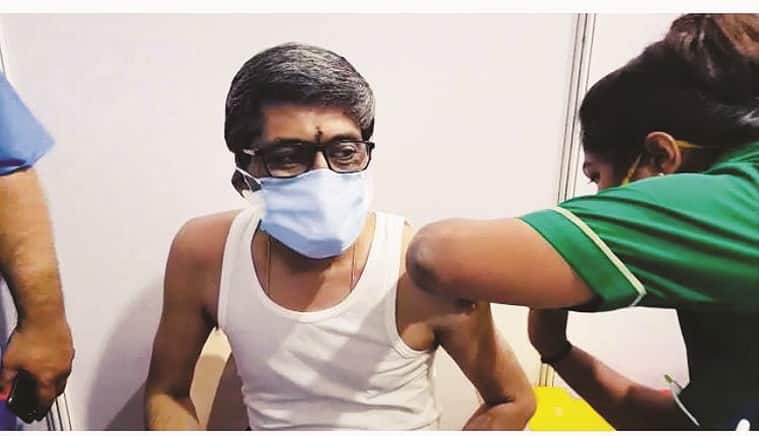 Jharkhand conducted the vaccination drive accross 48 sites among 3,200 health workers. The state has 1.5 lakh health care workers. It faced several challenges in preparing for the vaccination process. Prem Kamal, state head of the UN Development Program, which provided some tech support, said data of health care workers was not available as a whole with government. “Every PHC, block level gave the data to us of all ANMs, nursing homes, students, and hospitals. It was an example of extraordinary teamwork.” He added that during uploading of the data there was a problem as the CoWIN platform is based on pin codes.

Several TMC leaders, including two MLAs, were among those who received a Covid-19 vaccine in Purba Bardhaman district, while many healthcare workers alleged that they could not get inoculated though they were asked to visit a vaccination centre. According to officials, 20,700 workers were scheduled to be inoculated by the end of the day in 207 centres, but 25 per cent of those eligible did not turn up. Glitches in the Centre’s CoWIN vaccine registration app since Friday impeded many immunisation centres’ efforts. Haryana’s vaccine roll-out began Saturday at 77 sites which will attempt to inoculate 1.3 lakh frontline workers over five days. Haryana has received 2,41,500 doses of Covishield and 20,000 doses of Bharat Biotech’s Covaxin. While Covishield was administered at 71 sites, the remaining six sites used Covaxin. “Depending upon supplies, we can keep enhancing our vaccination capabilities. As of today, we have over 5,000 vaccinators and Haryana has a capacity of vaccinating at least 5 lakh people on a daily basis,” said the state’s Additional Chief Secretary (Health) Rajeev Arora.

Patna: Bihar Health Minister Mangal Pandey Saturday said 18,122 people were vaccinated at 301 centres. The centres will carry out vaccination on four days in a week—Mondays, Tuesdays, Thursdays and Saturdays. The minister said there had been adequate preparations for bio-waste management after vaccination as colour-coded bags would be used to take it to cold chain point. Of 18,122 people vaccinated, 17,857 people got Covishield and the rest got Covaxin.

According to the Rajasthan Health Department, around 17,000 people were selected for vaccination on Saturday and around 9,279 were vaccinated till 4.30pm. The department said the vaccination will take place on four days every week, except Thursdays, Sundays and government holidays. The state has received around 5.63 lakh doses for the first phase of vaccination.

Seventy-two per cent—or 2,276 of the total 3,182—beneficiaries listed to be inoculated on Saturday turned up on the first day of the vaccination drive in Uttarakhand at the 34 vaccination sites across 13 districts. Chief Minister Trivendra Singh Rawat said the state has requested the Centre to provide additional 20,000 doses of the vaccine for Haridwar in view of the Kumbh Mela. 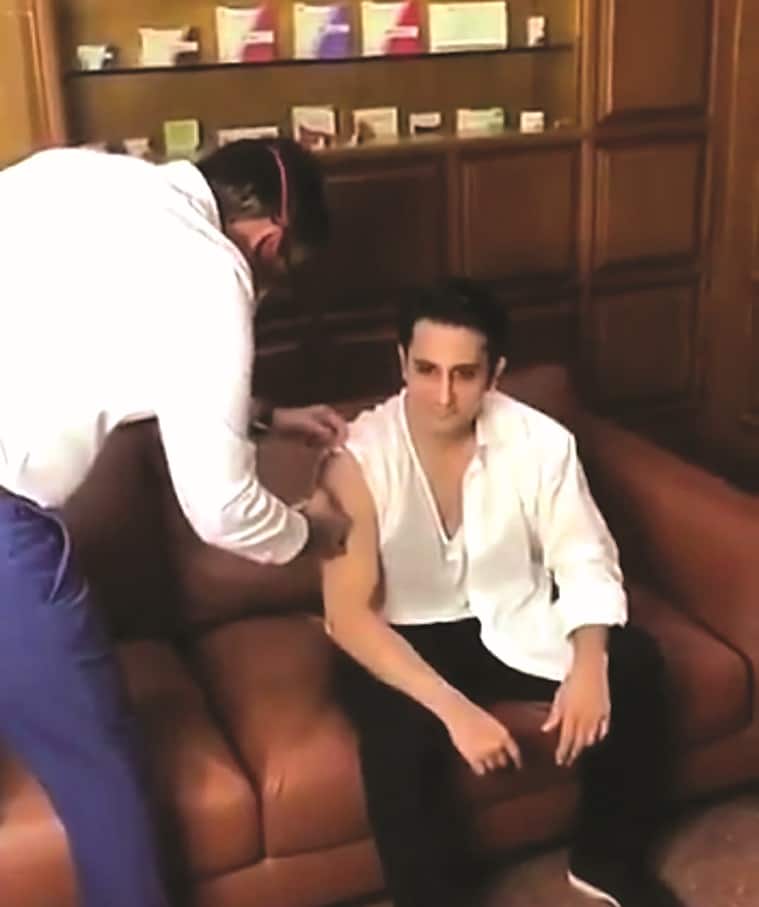 Of more than 16,000 health workers targeted to be covered, 11,800 received vaccines on the first day of the vaccination drive on Saturday. “While the target was getting 100 vaccinated per centre, it is not practically possible because some sites did not have as many health workers itself…,” said state immunisation officer Nayan Jani.

As many as 8,062 health workers were given the Covishield vaccine in Kerala on the first day as against the target of 11,138, according to Health Minister K K Shailaja. Palakkad district reported the highest number of vaccinated health workers (857), while Malappuram reported the lowest (155).

Kerala had got the first consignment of 4, 33,500 doses of Covishield vaccine earlier this week.

A total of 9,584 people, amounting to 64 percent of the targeted 15,000 healthcare workers, were administered the first dose of the vaccine on Saturday. Indore, which has the highest caseload of nearly 57,000 positive cases, saw about 76 per cent vaccination. In Bhopal, 51 per cent received the first shot. A total of 4.16 lakh health workers are to be vaccinated, of which 57,000 are scheduled to get the vaccine in the first week.

The vaccination drive has been started at 20 locations each in Kashmir and Jammu divisions with 100 people being vaccinated at each place. Around 1.6 lakh health workers will be covered in the first phase. They will be followed by nearly seven lakh frontline workers including security forces, paramilitary forces and police personnel, besides municipality workers and revenue department officials. 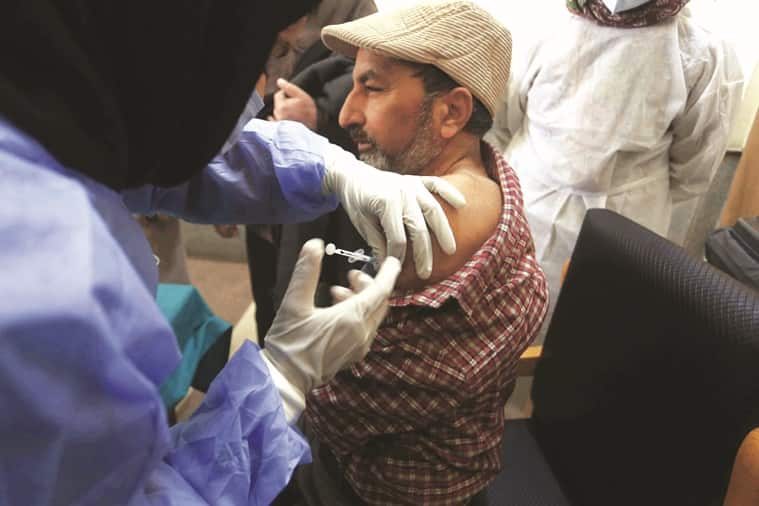 In Ladakh, around 100 medical staff at high risk were given the vaccine on Saturday. Skalzang Chodon, a sanitaion worker, got the first jab at Heart Foundation Hospital in Leh in the presence of the Lt Governor R K Mathur and MP Jamyang Tsering Namgiyal.

Health Minister Himanta Biswa Sarma said the vaccination drive began at 65 centres across Assam, including seven medical colleges and 24 district hospitals. The state has received 2.21 lakh (2 lakh doses of doses of Covishield and 20,000 doses of Covaxin) vaccines. Each site will administer vaccine to 100 persons in a day. Nearly 1.9 lakh frontline workers will be covered in the first phase.

Nearly 62 per cent of the beneficiaries received the vaccine on the first day in Karnataka as the immunisation programme was rolled out at 243 government and private centres. “As many as 21,658 people were identified…of these, 13,408 availed the vaccine. There were no adverse effects but there were instances of swelling in some cases after the injection,” Health Minister Dr K Sudhakar. A total of 7.43 lakh health workers have been identified in the state for vaccination and eight lakh doses have been sent by the Centre, the minister said.

More than 20,000 health workers were vaccinated at 317 centres with nearly 35 per cent missing their doses on the first day. Chief Minister Yogi Adityanath and Defence Minister Rajnath Singh visited hospitals in Lucknow to inspect the process. Of the 317 centres, 306 places administered the Covishield vaccine while the others gave doses of Bharat Biotech’s Covaxin. On the day one, a total of 1,327 beneficiaries turned up for taking Covishield shot, as against the target of 5,853 in 22 districts. This translates to merely 22.67 per cent of the target.

A cautious sense of relief was palpable through the day—be it among ministers, health professionals or those getting vaccinated

Harsh Vardhan, Union Health Minister: “These vaccines are the ‘sanjivani’ in our fight against this pandemic. We have won the battles against polio and small pox. Now, we have reached the decisive phase of winning the war against coronavirus.”

Dr Achyut Baishya, Principal, Gauhati Medical college and hospital: “I am very happy to receive the dose. From today we see a new beginning

Edappadi K Palaniswami, Tamil Nadu chief minister: “Everyone should for sure get vaccinated. You and I have to get vaccinated. Those from your and my family too should get the vaccine.”

Uddhav Thackeray, Maharashtra chief minister: “It is a revolutionary step we are taking today. I salute the corona warriors who selflessly treated the Covid-19 patients when there was no remedy available.”

K K Shailaja, Kerala Health Minister: “The pandemic is not going to end after this vaccine. We still need to make sure that we follow the health protocol, including the use of masks, hand wash and social distancing. Immunity will be developed slowly.”

Sudhir Bhandari, Principal, SMS hospital, jaipur: “We got the supply of Covishield. It doesn’t matter if it is Covishield or Covaxin. All are well-tested and scientifically planned vaccines.”

Anju Bala, ‘ASHA’ from punjab’s fazilka: “Some ASHAs are refusing to get vaccinated due to myths. Hence, I came forward to get myself vaccinated first.”

M K Sudarshan, chairperson, Karnataka’s Covid-19 technical advisory committee: “Benefit of vaccination clearly outweighs the risk of disease…. I have taken the vaccine to give a message that it is safe.”

Trivendra Singh Rawat, Uttarakhand chief minister: “The antibodies begin to form two weeks after the second dose, which is administered on the 28th day after the first dose. You must show patience and wait for at least one-and-a-half months.”

V K Paul, NITI Aayog member: “I believe that this is a great vaccine. I have taken Covaxin. Embrace the vaccine.”

Abdul Qayoom, security guard at Era Medical College in Uttar Pradesh: “There was always fear in the mind because of close proximity to coronavirus patients. But now I am feeling much safer.”