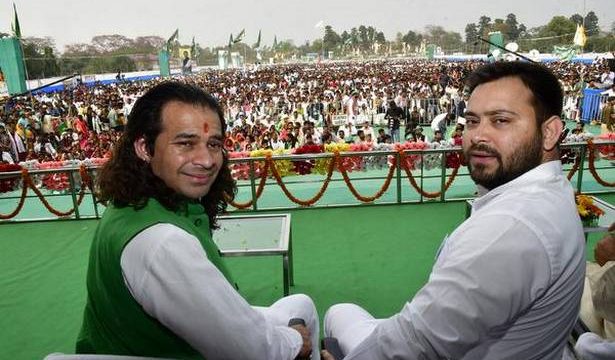 The bitterness between both the sons of Rashtriya Janata Dal (RJD) chief Lalu Prasad and former Bihar Chief Minister Rabri Devi escalated on Monday, with elder son Tej Pratap Yadav setting on a padyatra (foot march) from the historic Gandhi Maidan to the residence of former veteran socialist leader Jayaprakash Narayan to begin an LP (Lalu Prasad) movement a la JP movement in the State.

Mr. Tej Pratap had invited his younger brother Tejashwi Yadav, who is the Leader of the Opposition in the Assembly, and Mr. Prasad to join the movement. But there has been no response from them to it. Mr. Tej Pratap is said to be engaged in power struggle with Mr. Tejashwi , in family and within party as well. On Sunday, Ms. Devi dashed to Patna and drove straight to Mr. Tej Pratap’s residence to meet him and bridge the widening rift between the siblings. However, minutes before her arrival, he left the house.

On Monday, when Mr. Tej Pratap, RJD MLA from Hasanpur, took out the Janshakti Yatra, named after a students organisation he had formed recently, he moved past his mother’s residence but didn’t stop to meet her. He garlanded the statute of Jayaprakash Narayan and marched barefoot to his residence in Kadamkuan locality of Patna. However, he told media persons later that he would meet his mother soon to seek her blessings.

Recently, senior RJD leader Shivanand Tiwari said Mr. Tej Pratap had been asked to stay away from party affairs. He had attacked State party chief Jagdanand Singh with unsavoury remarks on several occasions. This apparently had enraged his father.

Mr. Tej Parap recently went to Delhi to meet his father, who is recuperating at his elder daughter and party’s Rajya Sabha member Misa Bharti’s residence, but party sources told The Hindu that he returned empty-handed from there. Later, he said his father had been taken “hostage” in Delhi and was not being allowed to come to Patna. But Mr. Tejashwi responded, “Can a person like Lalu Prasad be taken hostage by anyone?” and added, “he [Mr. Prasad] would come to Patna soon”.

Mr. Tej Pratap has also been taking on a close aide of Mr. Tejashwi for allegedly plotting against him to misinform his “chhota bhai (younger brother) who is Arjun for him. “He [Sanjay Yadav, close aide of Mr. Tejashwi, from Haryana) is a C-grade Haryanvi script writer”, stated Mr. Tej Pratap who, among party men, is known for his maverick mannerisms and earthy remarks like the early days politics of Mr. Prasad. “ People say I’m like my father”, he tweeted few days back. He recently announced that he would go to Tarapur to campaign for Mr. Sanjay Yadav, independent candidate, but within 24 hours Mr. Sanjay made a U-turn to join the RJD and expressed his loyalty to Mr. Tejashwi, while extending support to the official RJD candidate, Arun Kumar Shah.

“Both the brothers are engaged in power struggle within the party and family as well but Mr. Tejashwi seems to have got the blessings of his parents and mass support in the party. Mr. Tej Pratap has to be politically more mature and serious to make his mark, which Mr. Tejashwi had showed and moved much ahead of him”, said political observer Ajay Kumar.

A senior RJD leader said, “The party has accepted Mr. Tejashwi as leader, and barring few countable leaders, no one likes to support Mr. Tej Pratap in the party.”