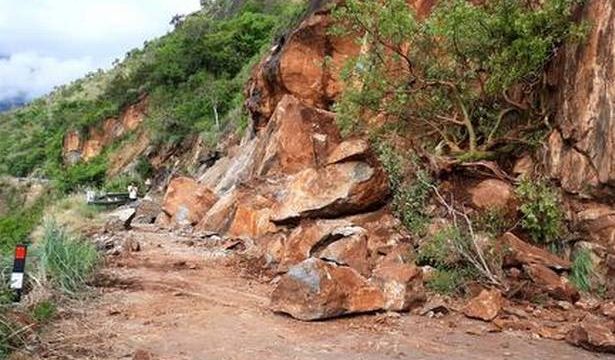 Traffic on Kochi-Dhanushkodi National Highway (NH 85) was suspended for hours after a major landslip at Munthal, near Bodimettu, on Kerala-Tamil Nadu border blocked the road on Monday afternoon.

Huge blocks of rocks from the upper part of the road fell on the road at around 1.30 p.m. following heavy rainfall, said the sources. The traffic on the stretch was less following the lockdown in Kerala and Tamil Nadu, and thus the impact of the landslip was considerably reduced.

Munnar-Bodimettu stretch, the main road connecting Kerala to Tamil Nadu, is used to carry goods from Tamil Nadu. There are three roads connecting Kerala with Tamil Nadu from Idukki, the other two being one via Cumbom Mettu and then through Kumily. The narrow stretch from Bodimettu with hairpin curves was constructed by cutting the heavy rocks on the loose soil.

Post the landslip, the workers were seen blasting the rocks to restore traffic, according to an official of the NHAI (National Highway Authority of India).

There are chances of more landslips, according to officials.

A major landslip on the Lower Periyar stretch, near Kumily, on the Kollam-Theni National highway in 2018 had suspended the traffic for a month. The traffic was then diverted via Cumbom Mettu.

The NHAI official said the landslip-hit stretch was under the NHAI Tamil Nadu region. “We have received information that the NHAI Tamil Nadu wing officials have begun efforts to clear the debris from the road and resume the traffic in the stretch,” he said.

The traffic on the Gap road stretch of the Kochi-Dhanushkodi NH was already suspended, as the road work was not completed following a major landslip on June 17 and August 6 last year.