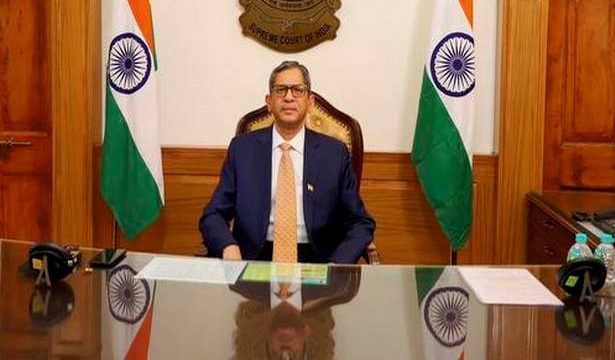 Formalising live-streaming of court proceedings is crucial for dissemination of information. The spread of information is sacrosanct to free speech, Chief Justice of India N.V. Ramana said on Saturday.

The CJI said the Supreme Court is “keen” to commence live-streaming of its proceedings. “We are working out the logistics and working on the full consensus of the full court… We can introduce live-streaming in a cost-effective manner without much of a burden on the exchequer,” Chief Justice Ramana explained.

The people of India have a right to be informed about the institutions which serve them. It is only on the backs of an informed citizenry that a representative democracy can survive and evolve, the CJI noted.

The Chief Justice said it was high time to “widen” the gates of the already “open” court system to de-mystify the justice delivery mechanism. Incorrect notions and misapprehensions about courts had seen a disinclination among people to approach courts for redressal of their rights, he said.

“Currently, the public obtains information about court proceedings through the media. In effect, the information from the courts is being filtered by agents of transmission. In the process, there is sometimes a transmission loss leading to misinterpretation of questions asked and observations made by the Bench due to the absence of context. Vested interests are eager to amplify these misinterpretations in order to embarrass or discredit the institution,” the CJI said.

However, the CJI said live-streaming was a “double-edged sword”. Judges, working under public scrutiny, may face a stressful environment.

“A judge cannot be swayed by popular opinion. Yes, with increased public gaze, he might become a subject of multiple debates, that should never deter him from his duty to protect the right of one against the might of many. Always remember, as a repository of people’s faith, a judge cannot afford to lose objectivity,” Chief Justice Ramana advised.

To lawyers, he said, they should watch over their clients’ interests rather than vie for publicity.

The CJI said the rules of live-streaming should be calibrated to protect the privacy and security of victims and witnesses.