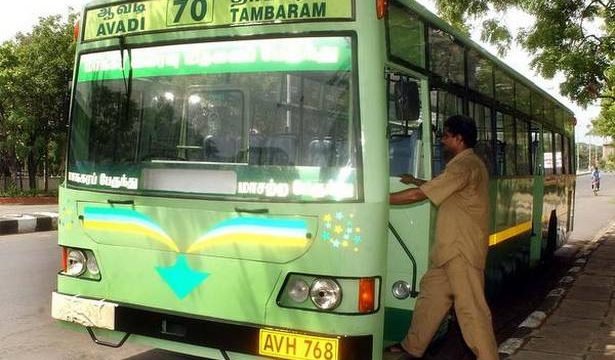 The interim injunction was issued on a batch of cases pending in the court for long, seeking universal use of disabled-friendly buses; the State’s submission that low-floor buses were expensive and would be damaged by bad roads was rejected

The Madras High Court on Thursday restrained the State government from adding any new bus to its fleet used for public transport, unless the vehicle was disabled-friendly as required under the law.

Chief Justice Sanjib Banerjee and Justice Senthilkumar Ramamoorthy issued the interim injunction on a batch of cases pending in the court for long, seeking universal use of disabled-friendly buses.

Advocate General R Shunmugasundaram said the government was purchasing disabled-friendly buses in phases because the roads were in bad shape and they would damage the low-floored buses.

Advocate Rita Chandrasekar, representing Metropolitan Transport Corporation, said the low floor buses cost ₹58 lakh each as against ₹26 lakh for regular buses and hence there was a delay in purchasing such buses.

Rejecting their submissions, the court said the government could not give any kind of excuse when it was bound to implement the provisions of the Rights of Persons with Disabilities Act of 2016 and the statutory rules framed thereunder.

One of the writ petitions in the batch had been filed by cross disability rights advocate, Vaishnavi Jayakumar. She had challenged a Government Order (GO) issued on February 24 this year, for introduction of only 10% of low floor buses and 25% of buses fitted with lift mechanism or any other suitable mode, to provide easy access to wheelchair bound passengers, out of the total buses to be procured for Metropolitan Transport Corporation (Chennai) Limited.

The petitioner had contended that the GO violates Section 41 of the Rights of Persons with Disabilities Act of 2016. The legislation requires the State government to take suitable measures to provide facilities for persons with disabilities at bus stops, railway stations and airports and also access to all modes of transport by even retrofitting old modes of transport wherever it was technically feasible.

She said the GO for introducing only 10% of low floor buses and those with lift mechanism was also in violation of Articles 14 (equality before law) and 21 (right to life) of the Constitution. “The GO is an arbitrary exercise of power by the State. It is not only in complete violation of the rights of persons with disabilities but also contumacious, since it violates several judicial orders,” she said.