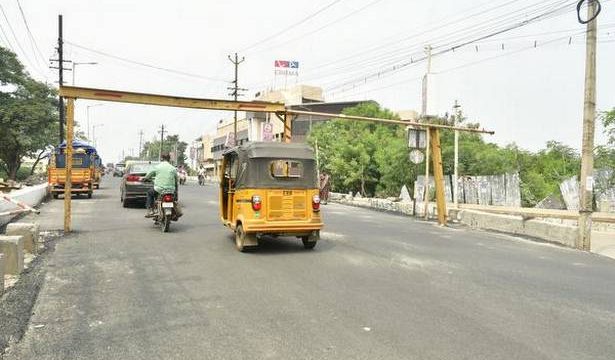 TIRUCHI: The road overbridge (ROB) near the Maris Theatre complex on Fort Station Road in the city has been reopened for light vehicle traffic after repairs.

The ROB situated on the arterial road linking the Salai Road and the Main Guard Gate area had remained closed for traffic for several months now, after a portion of its retaining wall on the eastern side of its approach road caved in following a spell of heavy rain in July 2020.

The Corporation had taken up repair to rebuild the retaining wall at a cost of nearly ₹2.90 crore. The road was thrown open for traffic following the completion of the work. However, only light vehicles were being allowed to ply over the bridge, said to have been built in 1876, is considered to be weak. Steel height barriers have been installed on either sides of the ROB to prevent heavy vehicles movement.

While the opening of the ROB has come as a big relief for motorists, especially during the festival season when there is bound to be heavy traffic movement towards the city’s main commercial areas around the Rockfort, city residents hope that the Corporation would soon take steps to rebuild the narrow bridge.

“It is high time that the Railways and the Corporation rebuilt the narrow ROB which had been in a poor condition for many years. It is an important bus route road,” observed R.Gopal, a city resident.

The Corporation had previously, especially after the damaged to the approach road in 2020, unsuccessfully tried to persuade the Highways Department to take over and rebuild the ROB. The Railways is said to be keen on rebuilding the bridge portion over the railway tracks and the Corporation has now decided to build the approach raods on either sides. Minister for Municipal Administration K.N.Nehru had also recently asserted that the civic body would do the work.

“The Detailed Project Report has been prepared at an estimate of about Rs.46 crore and sent for sanction of funds,” an official said.