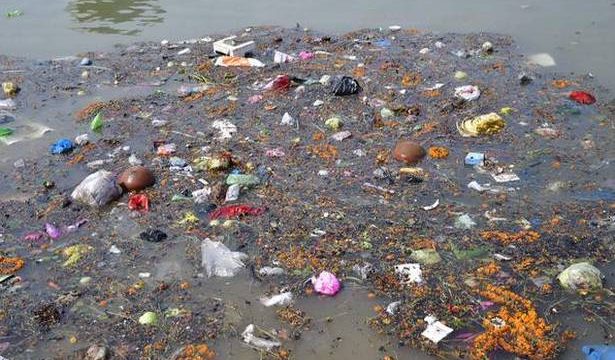 They are recognised as major source of marine pollution

An analysis of the stretches of the river Ganga by Delhi-based environment NGO Toxics Link has revealed pollution by microplastics, defined as synthetic solid particles sized ranging 1 micrometre (μm) to 5 millimetre (mm), which are insoluble in water.

The Ganga flows across five States and has been at the centre of a massive multi-crore undertaking by the Centre, in the form of the National Mission for Clean Ganga, to rid it off contamination.

Microplastics are recognised as a major source of marine pollution. Untreated sewage from many cities along the river’s course, industrial waste and religious offerings wrapped in non-degradable plastics pile pollutants into the river as it flows through several densely populated cities. The plastic products and waste materials released or dumped in the river break down and are eventually broken down into micro particles and the river finally transports significantly large quantities downstream into the ocean, which is the ultimate sink of all plastics being used by humans.

“Essentially all along microplastics are flowing into the river system. It does reflect or suggest a direct linkage between the poor state of both solid and liquid waste management; hence it is critically important to initiate steps to remediate it, said Priti Mahesh, Chief Coordinator at Toxics Link, said in a statement.

The study, ‘Quantitative analysis of Microplastics along River Ganga’ was based on an analysis of water samples at Haridwar, Kanpur and Varanasi.

The highest concentration of such plastic was found at Varanasi, comprising single-use and secondary plastic products. The water testing was carried out in collaboration with the National Institute of Oceanography (NIO) in Goa. The samples were tested to identify the exact type or resin core and the results show presence of at least 40 different kinds of polymers as microplastics.

The shapes and nature of the observed resins ranged from fibres to fragments, films and beads. Fragments were the predominant shape in all locations, followed by film and fibre.

Microbeads were observed in Varanasi and Kanpur, while no beads were found in Haridwar. “ The most frequent size range observed in all the samples was <300µm,” said Dr. Mahua Saha, the lead researcher from the NIO.

Previous studies say that over 663 marine species are affected adversely due to marine debris and 11% of them are said to be related to microplastic ingestion alone.

“We need to address the threat of plastic on aquatic life more realistically and with a futuristic eye. Various stakeholders, including industry, the government and civil society organisations,