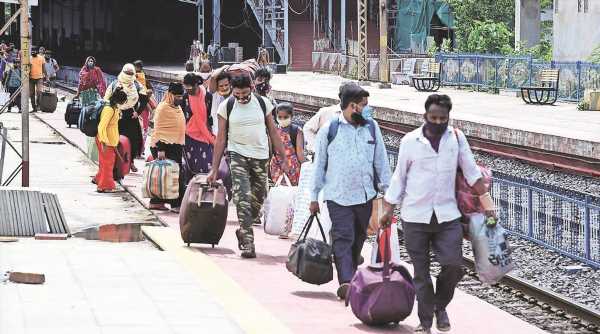 The crisis during the pandemic highlighted the vulnerabilities faced by them, making clear the need for clear policy framework and greater commitment to their welfare The heart-rending migrant crisis after the first lockdown captured people’s imagination, compelling policy-makers to make certain provisions for them in the schemes announced for the assistance of the poor. The migrants’ crisis after the second wave was a silent one. While it was partly moderated by the continued operation of public transport, it nevertheless affected millions of migrants. It also came on the back of the first crisis, where the same workers who have suffered since the initial lockdown were confronted with a second spell of distress return migration and unemployment. Yet this crisis is only a part, albeit an important one, of the recurrent crises affecting the lives of the vast majority of informal workers, greatly deepened by the pandemic and policies that have followed it.

On June 29, the Supreme Court finally delivered its judgment on the plight of the migrant labour, also providing a kind of stocktaking of how little things had changed for them in the intervening period. The judgment was limited in scope, confined to the framework of existing social security schemes, but it was notable for two main reasons. First, it recognised that there was large-scale exclusion of migrant workers and other informal workers from existing schemes due to the lack of their registration and outdated eligibility lists. It noted that no benefits will be denied to migrant workers for want of an Aadhaar card and that food assistance will be provided for migrants who were not covered by the National Food Security Act. Second, it connected informal workers and migrant workers, both of whom experience exclusion, and mandated that the portal for registration of all informal/migrant workers should be fully operational before July 31.

Nearly a decade and a half ago, the National Commission for Enterprises in the Unorganised Sector (NCEUS) had pointed out that the circular migrant workers were a disadvantaged segment among informal workers. We now estimate that these migrant workers comprise nearly 60 per cent of occupationally vulnerable workers outside agriculture. Building on its approach, the NCEUS had advocated a comprehensive law for the protection of the rights of all informal workers, including migrants, home workers, and domestic workers. It had also recommended a universal registration mechanism based on self-declaration, with the issuance of a smart social security card, and a National Minimum Social Security Package available to all informal workers through law, within a definite time-frame.

In drafting the Unorganised Workers’ Social Security Act, which was approved by Parliament in December 2008, the then government took out the mandatory elements of the NCEUS’s proposals, and included neither a National Minimum Social Security Package, nor the provision for mandatory registration. The Supreme Court judgment may well now push the government towards the second, but this will be seen only in the course of time.

The Covid-19 crisis has highlighted the many commonalities between all economically and occupationally vulnerable informal workers and seasonal/circular migrant workers and exposed the fault lines and gaps in the existing social protection system. But it has, at the same time, also underscored the additional vulnerabilities faced by segments of informal workers based on their social and cultural identity, and position in the labour market. During the crisis, a number of surveys have focused on the condition of these workers. The Azim Premji University’s State of Working India Report 2021 presents a survey of surveys along with the findings of its own studies. Apart from job losses, it reports deterioration in the quality of work, indebtedness as a coping strategy, and lower incomes compared to pre-lockdown levels, pushing hundreds of millions of households into poverty. While circular migrants were the hardest hit, the effects were disproportionately large for the poorest households, and women and young workers. Other than the PDS, the social protection net provided protection to few households, and the benefit of the extended schemes also remained restricted, particularly for migrant workers.

This crisis must draw the attention of policy-makers to the provision of a minimum level of guaranteed social security/social protection for all informal workers and their households within a definite time-frame. This would involve a clear framework and a commitment to greater public resources being spent on social protection as a large class of workers in India do not have an identifiable employer and a contributory social insurance framework will not work for them. Investment in social protection is not charity or “helicopter money”, as some call it disdainfully. It is an investment in workers’ productivity and in equitable growth. It is, as the UN mooted in 2009 when it spelt out the social protection floor (SPF) initiative after the global financial crisis, the surest way out of a crisis by boosting demand at the bottom of the pyramid. The report of the Advisory Committee of the ILO, in which India was represented by its labour secretary, provides a strong rationale for instituting an universal SPF during economic crises. As a result, all constituents of the ILO adopted Recommendation 202 on social protection floors at the International Labour Conference in 2012.

Sceptics may ask how the government can achieve an universal SPF under the financial constraints imposed by the current crisis. Undoubtedly, the government should have spent more on the poor during the crisis, since the allocated expenditure was inadequate and trifling as a percentage of the GDP. More significantly, these were discretionary, ad hoc, one-time expenditures, whereas additional resources should have been spent as part of a definite plan to deliver a guaranteed minimum, invoked as a right.

To end the silent, painful, and enduring crisis for the workers, as well as the crisis for the economy, the government must urgently recognise the right to social security, embedded both in the Indian Constitution and international covenants, embrace ILO’s Recommendation 202 and work towards these in a time bound manner.

This column first appeared in the print edition on July 17, 2021 under the title ‘The silent crisis’. The writer is director, Centre of Employment Studies, Institute for Human Development, and a former member of the NCEUS.