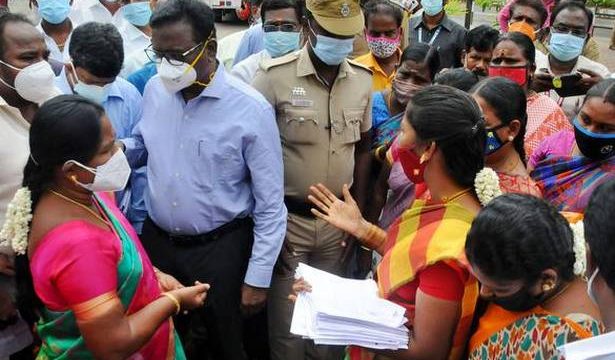 Minister for Adi Dravidar Welfare N. Kayalvizhi Selvaraj asked official to take steps to ensure that students from the Scheduled Caste and Scheduled Tribe communities did not drop out of school.

Ms. Selvaraj was in Coimbatore on Friday to review the progress of schemes the Department of Adi Dravidar Welfare implemented in Coimbatore, the Nilgiris, Tiruppur and Erode.

A release from the district administration said besides asking the officials to track the students who dropped out of school to re-enrol them, the Minister directed officials to ensure that the students from the SC, ST communities in government and government-aided schools received free bicycles, education assistance, free textbooks, etc. And at government-run hostels, the students had access to safe drinking water, clean toilets and other basic amenities.

In response to petitions submitted to her, the Minister told officials to review pending applications and ensure that people who sought appointment on compassionate grounds received the orders without further delay.

The release further said that Ms. Selvaraj asked the district administration officials to direct their subordinates to go on field inspection to provide free title deeds to eligible families from the SC, ST communities and issue community certificates without delay so that they became eligible for all government schemes.

Detailing the steps taken by TAHDCO, the Minister asked officials to provide financial assistance to empower the people from the two communities and take steps to encourage them to become entrepreneurs.

She later handed over keys of goods carriers and taxis to persons who had applied for schemes run by the Department, handed over cheques for ₹ 31.97 lakh to those who had applied under the self-employment scheme, title deeds to three families and community certificates to six persons, the release added.

Senior officials from the four districts participated in the programme.