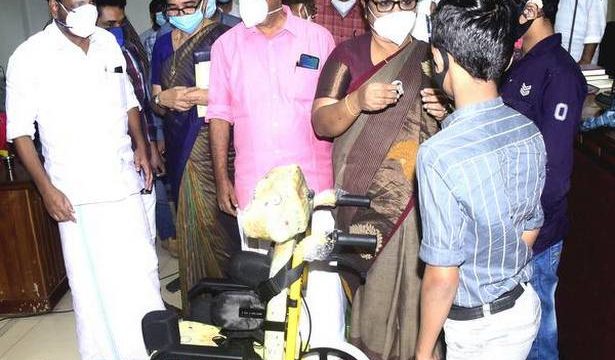 Making Kerala a “differently abled friendly” State was one of the prime targets of the State government, said Minister for Higher Education and Social Justice, R.Bindu, here on Friday.

Performing the State level inauguration of the disbursal of aid to the differently abled under the aegis of the Kerala Handicapped Persons’ Welfare Corporation in Kozhikode, the Minister said that efforts would be made to create an environment in which the differently abled persons in the State could overcome their physical difficulties and mental challenges, and be a part of the society without any inhibitions.

“All efforts will be made to enable them to reach heights in their career and education. Steps have been taken to make all schools and colleges in the state differently-abled friendly”, the Minister said.

The Minister gave away digital hearing aids to 12 people under the ‘Shravan’ programme, while 57 more are to get it in the coming days. She also gave away smartphones to 9 visually impaired people.

The certificates for ‘Hasthadanam’ project (for children below 12 years of age, in which ₹20,000 is deposited into their account until they reach 18) were given to two. The remaining will be given the certificates in the coming days. The ‘electronic wheel chairs’, under the ‘Shubhayatra’ project to ensure the freedom of movement for differently abled, will be taken to their respective homes.