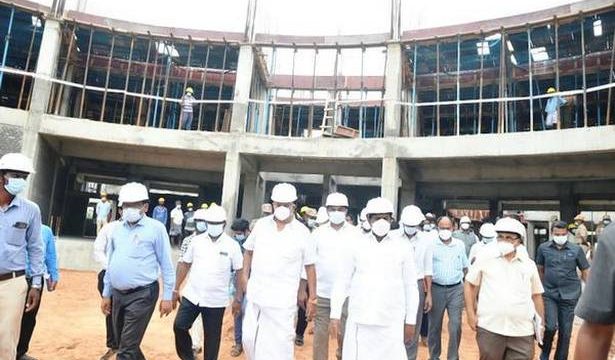 E.V. Velu asks officials to complete the project by year-end

The on-going construction of the District Collectorate in Ranipet was inspected by Public Works Department Minister E.V. Velu on Wednesday. He urged officials to complete the work by the end of the year.

The ground floor of the new complex will have public facilities such as banks, ATMs, post office, grievance redressal hall, R.O water taps and toilets and ramps for the disabled. The work began in October last year. “Such small public offices in the new complex will help visitors to get things done quickly,” said A.R. Gladstone Pushparaja, District Collector, Ranipet.

Among other things, the complex, being built at a cost of ₹118.20 crore, will also have separate cabins for officials of various departments, conference room, LED lights, CCTV cameras and creche.

The entire complex will be solar powered to encourage the use of clean energy among officials and visitors. The complex will also have a large landscaping, small parks for children, playground, tiled walkers’ path and rainwater harvesting system. Currently, more than 500 workers, including 25 engineers, are working on the new building with 45% of the total work completed.

Similarly, work on the ₹109.71 crore District Collectorate Complex in Tirupattur is in full swing with more than 50% of the total work completed. The new building will be a seven-story complex on 2.92 lakh sq.ft plot at the centre of the town.