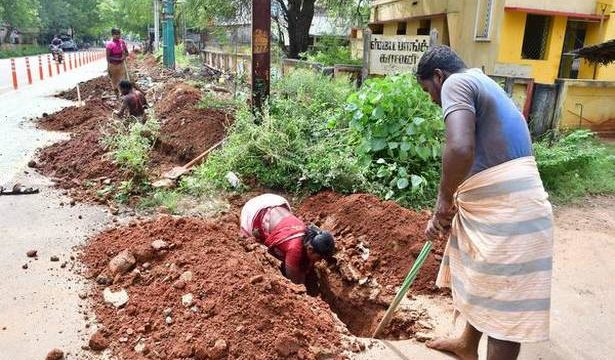 Residents allege that the ongoing cable laying work by a private communications firm at NGO Colony in Palayamkottai and the adjoining areas is damaging drinking water and underground drainage connections.

The service provider has been digging trenches and laying cables to strengthen its service across Tirunelveli and Palayamkottai, damaging the underground connections to the utilities in the process. In some places, the firm has installed poles at ‘cable connection junctions’ after closing the trenches.

“This effectively denies the residents the chance of repairing their damaged drinking water or underground drainage connections. Even though this issue was brought to the notice of the Corporation officials, this unfair practice continues to affect drinking water supply at several places,” complains S. Nallaperumal, a retired government employee and president of Drivers’ Colony Residents’ Welfare Association.

The residents also complain that the mobile phone firm refuses to properly close the trenches with soil and then concrete as mandated in the agreement it has reached with the Corporation.

When contacted, Corporation officials said the private firm had been asked to stop the work after complaints flooded their office. However, the firm continues its work in the early hours, the residents complain.

“The private firm’s contract workers drawn from Andhra Pradesh are compelled to work in the early hours. After digging the trench for about 1,000 feet along the north-south road near Employees’ Provident Fund Office to lay the cable, the workers dug across the 40-feet-wide road around 5 a.m. to connect two cables in a bid to evade action from the Corporation,” said Mr. Nallaperumal.

Assistant Executive Engineer of Tirunelveli Corporation’s Melapalayam Zone, Lenin, said the firm had been asked to dig the trenches carefully without damaging the underground drainage pipes and the domestic drinking water connections. “If the work results in damaging any pipe, it should be rectified on the spot. We’ve given them necessary instructions and any violation will be viewed seriously,” Mr. Lenin said.