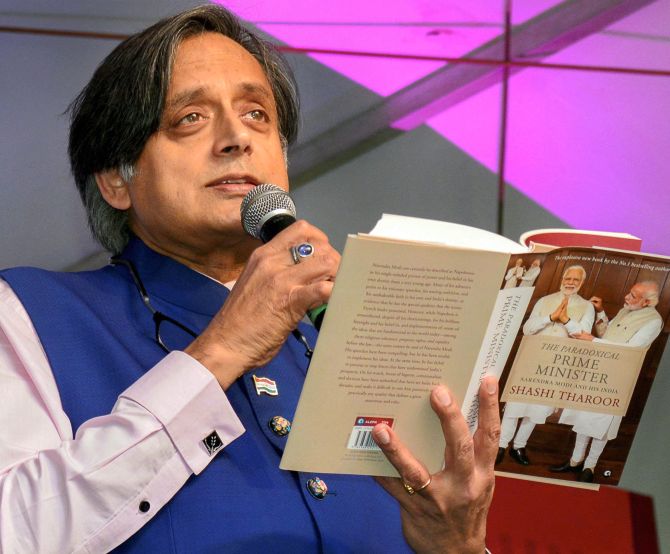 Congress MP Shashi Tharoor has once again triggered a controversy with a new analogy on Prime Minister Narendra Modi.

Speaking about his newly-launched book, The Paradoxical Prime Minister: Narendra Modi and His India, at the Bengaluru Literature festival, Tharoor said he recalls an old news article where an “unnamed RSS source” had compared Modi with a scorpion sitting on a Shiv Linga.

“There’s an extraordinarily striking metaphor expressed by an unnamed RSS source to a journalist. The RSS source said Modi is like a scorpion sitting on a Shiv Linga. You cannot remove him with your hand and you cannot hit it with a chappal (slipper) either,” he said.

Tharoor claimed that this quote of the unnamed RSS source was quoted in a news article that he had read some years ago.

Elaborating on the metaphor, Tharoor said, “If you think about it, it is a very profound understanding of the relationship. If you remove a scorpion with your hand, you will get stung very badly. But if you hit a Shiv Linga with a slipper, you undermine all the sacred tenets of the faith you all know on which the scorpion is sitting on.”

Tharoor said this may well be “an interesting clue” to the complex dynamics that exists between the Hindutva movement and the Moditva expression of it.

Hitting out at Tharoor, the Bharatiya Janata Party has asked Congress chief Rahul Gandhi whether he supports his party leader’s comments.

The party, seeking a response from Gandhi, said he should apologise to Hindus, if he does not support the statements made by his party MP.

“The Congress claims to represent the heritage of Mahatma Gandhi, Jawaharlal Nehru and Indira Gandhi. Today, under the presidentship of Rahul Gandhi it has been reduced to hurling abuses and the worst form of civil discourse,” BJP leader and Union minister Ravi Shankar Prasad said.

WATCH THE VIDEO BELOW

He said while he would not like to comment on Tharoor’s remarks “against whom a chargesheet has been filed in a murder case”, but he would like to know where Rahul Gandhi, who claims to be a Shiv Bhakt, stands on the issue.

“Gandhi claims to be a Shiv Bhakt now he should make it clear whether he supports Tharoor’s remarks which are an insult to Lord Shiva. If he does not support the remarks he should apologise to Hindus,” Prasad said.

“The whole nation is watching … while Rahul Gandhi who claims himself to be a Shiv Bhakt, one of his small leader has almost abused the sanctity of Shiv Linga and Lord Mahadev by referring to chappal attack through named sources. Please reply to this very horrific denunciation of Lord Mahadev,” he told reporters.

Tharoor had recently courted a huge controversy with remarks that the BJP, if voted to power again, will rewrite the Constitution and pave the way for creation of a “Hindu Pakistan”.

With inputs from ANI and PTI

The latecomer’s guide to face masks

Collections, cash flows of top-3 realtors hit in Q1
We and our partners use cookies on this site to improve our service, perform analytics, personalize advertising, measure advertising performance, and remember website preferences.Ok