PM Modi inaugurated and laid the foundation stone of various development initiatives from the Jawaharlal Institute of Postgraduate Medical Education and Research in Puducherry. 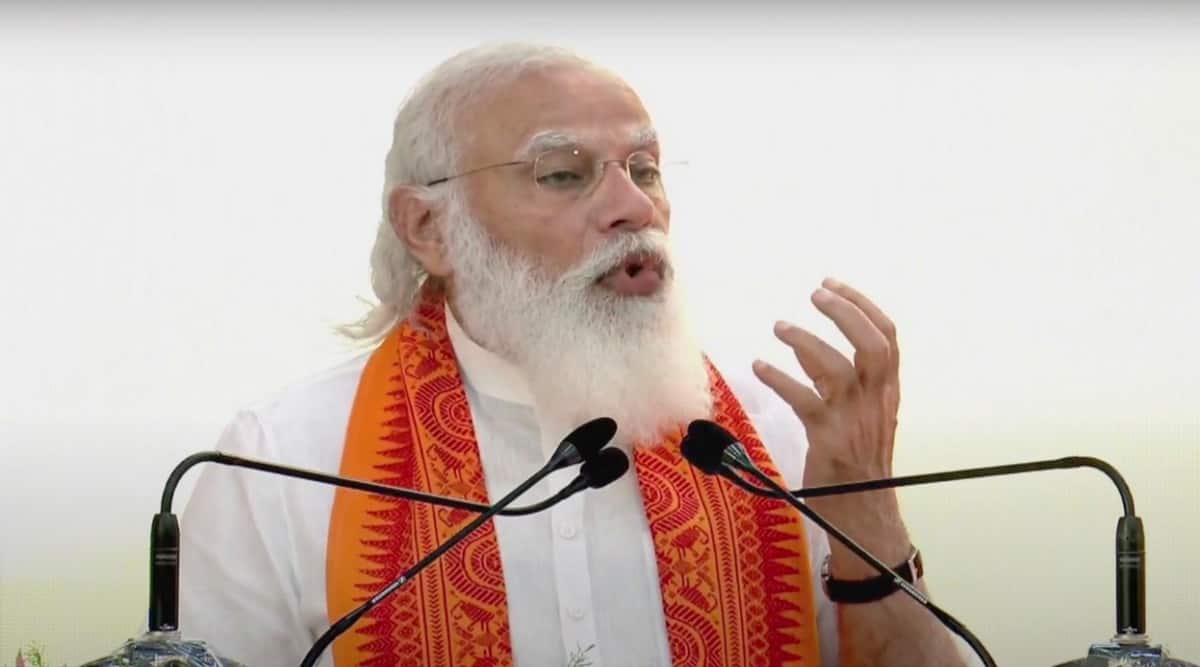 Prime Minister Narendra Modi Thursday launched a scathing attack on the Congress and its erstwhile government in Puducherry after inaugurating a slew of development projects in the Union Territory.

Addressing a public meeting in the poll-bound UT days after the Congress-led government lost power during a vote of confidence, Modi said winds of change are visible in Puducherry.

In an apparent reference to the V Narayanasamy government that fell on Monday, the PM said that the people of Puducherry are “celebrating freedom from the misgovernance of the Congress”.

He further said that the Narayanasamy-led dispensation had “different priorities” than public welfare.

“Puducherry got a government in 2016 that was busy serving the Congress high command and that their priorities were different,” the PM said.

Further targeting Narayanasamy, he added, “Your former CM was an expert in lifting the slippers of his top party leaders but not interested in lifting the people of Puducherry out of poverty”.

Averring that the people of Puducherry did not deserve a “high command” government that would serve a few Congress
leaders, Modi assured that the NDA government, if voted in the coming elections, would treat people as its high command.

Further referring to a viral video, wherein Narayanasamy was seen wrongly translating a fisherwoman’s complaint in front of Congress leader Rahul Gandhi, Modi said, “A few days ago, the entire nation saw a video. A helpless woman had complained about the Puducherry government and CM’s neglect during the cyclone and floods. One could see the pain in her eyes. One could hear the pain in her voice. Instead of telling the truth to the nation, former Puducherry CM gave a wrong translation of the woman’s words.”

The woman had complained to Gandhi about the government’s “negligence” in the aftermath of Cyclone Nivar.

In an apparent reference to Rahul Gandhi’s recent ‘north-south’ remarks which the BJP had opposed fiercely, Modi said our colonial rulers had the policy of divide and rule, whereas Congress “has a policy of divide, lie and rule,” adding that the party “puts region against region, community against community”.

The Prime Minister also expressed ‘shock’ over Gandhi’s statement that there was no ‘dedicated’ fisheries ministry at the Centre, adding the NDA government had set it up in 2019 and that its budgetary allocation has substantially gone up
ever since.

Earlier in the day, PM Modi inaugurated and laid the foundation stone of various development initiatives from the Jawaharlal Institute of Postgraduate Medical Education and Research in Puducherry.

The Prime Minister laid the foundation stone for 4-laning of NH 45-A – 56 km Sattanathapuram-Nagapattinam package of Villupuram to Nagapattinam project covering Karaikal district. The capital cost to be incurred in this project is about Rs 2,426 crore.

He also laid the foundation stone of the Medical College Building at Karaikal New Campus — Phase I, Karaikal District (JIPMER) and the Minor Port at Puducherry under Sagarmala scheme, which will provide connectivity to Chennai and facilitate cargo movement for industries in the UT. He said once the port project is completed, it will help the fishermen who have been using this port for venturing into sea for fishing operations. 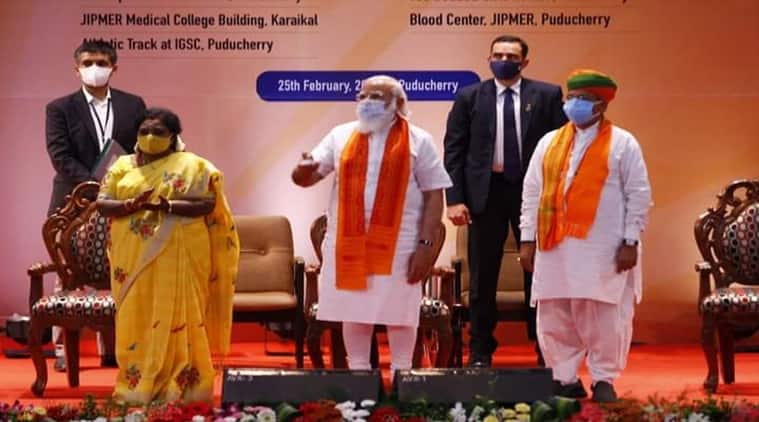 PM Modi laid the foundation stone of Synthetic Athletic Track at the Indira Gandhi Sports Complex and inaugurated a 100-bed girls’ hostel at Lawspet, which has been constructed for female athletes at a cost of about Rs 12 crore, under the aegis of Sports Authority of India.

After laying the foundation stone for the 400 metre synthetic athletic track, the PM said it will nurture sporting talent in the Indian youth. He added that the project is part of the Khelo India scheme. “Youth from Puducherry can now excel in national and global sports meets,” he said.

He also inaugurated the blood centre at Jawaharlal Institute of Postgraduate Medical Education & Research (JIPMER), which will function as a research laboratory and a training centre for short-term and continuous blood bank personnel training in all aspects of transfusion.