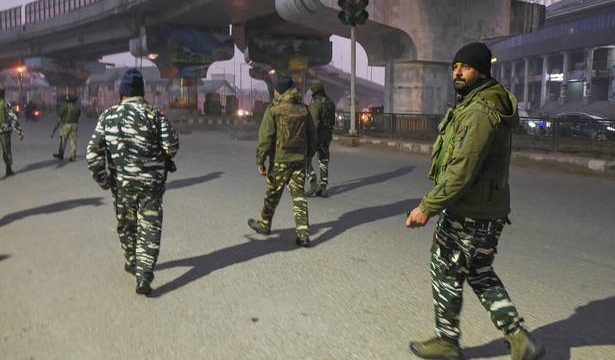 Acknowledging that poor families still need food security support in the middle of a recovering economy, the Centre has decided to extend its free ration scheme, Pradhan Mantri Garib Kalyan Anna Yojana (PMGKAY), for another four months, until March 2022.

More than 80% of terrorists killed this year in the Kashmir Valley were locals, according to Central Reserve Police Force (CRPF) data. CRPF is one of the largest central forces deployed in the Valley for counter-terrorism operations along with Jammu and Kashmir Police and the Army.

The Centre must not disturb the federal structure, West Bengal Chief Minister Mamata Banerjee reportedly told Prime Minister Narendra Modi on Wednesday at a meeting in Delhi, flagging the expansion of the BSF’s jurisdiction in the border States. Ms. Banerjee has demanded that the amendment to the BSF Act be withdrawn immediately.

At least 31 migrants bound for Britain died Wednesday when their boat sank in the English Channel, in what France’s Interior Minister called the biggest tragedy involving migrants on the dangerous crossing to date.

Births in institutional facilities, such as a hospital, improved by nearly eight percentage points but children who were either stunted or displayed signs of wasting only dropped by a maximum of three percentage points, shows a comparison of National Family Health Survey-5 (NFHS-5) and NFHS-4.

The Indian Navy on Wednesday said it will commission INS Vela, its fourth stealth Scorpene class submarine under Project 75, on Thursday, an induction that will boost its combat capability. Project 75 includes construction of six submarines of Scorpene design.

Senior Congress leader and Leader of the Opposition in the Meghalaya Assembly, Mukul Sangma, along with 11 other Congress legislators are said to have joined All India Trinamool Congress late on Wednesday evening. There was, however, no formal announcement by the MLAs as they are likely to hold a press conference at Meghalaya’s capital Shillong on Thursday morning.

Jaishankar to represent India at SCO heads of government meeting

External Affairs Minister S. Jaishankar will represent India at a meeting of the Council of Heads of Government of the Shanghai Cooperation Organisation (SCO) on Thursday. The meeting is expected to deliberate on a range of pressing regional issues, including the situation in Afghanistan.

Mumbai NCB chief Sameer Wankhede’s father Dnyandev Wankhede on Wednesday challenged before the division bench of the Bombay High Court the order of its single-judge bench that had refused to restrain Maharashtra Minister Nawab Malik from making comments and putting social media posts against the anti-drug agency officer and his family. His appeal is likely to be heard by the division bench today.

According a list of barred candidates issued by the country’s High National Elections Committee, Seif al-Islam Gadhafi is barred because of previous convictions against him. He can appeal the committee’s decision in court within the coming days.

The Special Investigation Team (SIT) on Wednesday in the Supreme Court defended its investigation into the Godhra riots cases of 2002. Appearing before a Bench led by Justice A.M. Khanwilkar, senior advocate Mukul Rohatgi said the SIT, which was appointed by the apex court, did a “thorough” job in probing the riots.

Kolkata Metropolitan Police registered a case against Sanjay Mishra, Officer on Special Duty (OSD) of Tripura Chief Minister Biplab Kumar Deb, under disaster management act and other IPC sections. A notice has been sent to him under Section 41 A of the Code Of Criminal Procedure (Cr.PC) to appear before the Investigating Office (IO) today.

Vice President M. Venkaiah Naidu will lead the Indian delegation at the two-day ASEM summit to be held virtually from Thursday. The ASEM or Asia-Europe Meeting is a platform for the countries in Asia and Europe to exchange views on regional and global issues and strengthen cooperation in a wide range of areas.

Punjab Chief Minister Charanjit Singh Channi on Wednesday urged Prime Minister Narendra Modi to give an ex gratia of ₹4 lakh to the kin of those who died of COVID-19, saying mere ₹50,000 compensation is insufficient. Mr. Channi wrote to Prime Minister Modi, saying his government is ready to contribute 25% of the ex gratia amlount.

Terror accused to be moved to AIIMS after HC’s observation

The family of research scholar Atiq-ur-Rehman, one of those arrested in Mathura on terror charges while going to Hathras following the gang rape and murder of a Dalit girl last year, said on Wednesday that he was being admitted to the AIIMS in New Delhi for treatment of a serious cardiac ailment.

Hours after being tapped as Sweden’s prime minister, Magdalena Andersson resigned Wednesday after suffering a budget defeat in parliament and coalition partner the Greens left the two-party minority government.

More than 80% of terrorists killed this year in the Kashmir Valley were locals, according to Central Reserve Police Force (CRPF) data. CRPF is one of the largest central forces deployed in the Valley for counter-terrorism operations along with Jammu and Kashmir Police and the Army.

First domestic flight from U.P.’s Kushinagar airport to take off on Friday

The first domestic flight from the recently inaugurated Kushinagar International Airport will take off for Delhi on Friday, airport director A.K. Dwivedi said on Wednesday. "From Friday, the Kushinagar International Airport will be functional. SpiceJet is launching a flight between Kushinagar and Delhi. From next month, flights for two more cities will take off from the airport — for Kolkata from December 17 and for Mumbai from December 18," Mr. Dwivedi said.