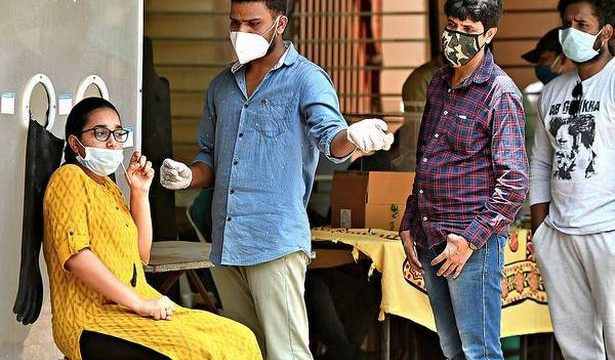 A select list of stories to read before you start your day.

With 1,03,955 new COVID-19 cases on Tuesday, India continues to record the most number of daily cases globally. Since April 3, India has been consistently registering more daily cases than U.S. and Brazil on an average, accounting for one in every seven new global cases. The last time India led the world in terms of daily cases was during the first wave in September.

Maoists demand mediator to release CoBRA commando from their custody

Maoists released a statement on Tuesday that the Central Reserve Police Force (CRPF) commando who went missing after the April 3 encounter at Tarrem in Chattisgarh’s Sukma was in their custody. The banned Communist Party of India (Maoist) also demanded that the State government announce a mediator for the release of the commando.

The Election Commission has said polling in the Kerala, Tamil Nadu and Puducherry Assembly elections and voting in phase three of the Assam and West Bengal elections on Tuesday went off peacefully and under COVID-19 protocols, with the turnout ranging from 71% to 79% as of 7 p.m..

The CBI registered a preliminary inquiry on Tuesday to probe corruption allegations against former Maharashtra home minister Anil Deshmukh. He had resigned as the Maharashtra Home Minister on Monday after the Bombay High Court directed the CBI to conduct a preliminary inquiry within 15 days into the allegations against him by former Mumbai police chief Param Bir Singh.

Coronavirus | No move to vaccinate all adults now, says government

With a growing public clamour for making vaccines available to all adults, the Union Health Ministry said on Tuesday that India was following a scientific protocol regarding administering vaccines and that it wasn’t possible “to suddenly ramp up” vaccinations.

Expected growth of 12.5% for India but “ very severe downside risks” due to COVID wave: IMF

After an estimated contraction of 8% in the fiscal year that ended March 31, India is projected to grow at 12.5 % during the current year, settling down to 6.9% growth year (FY22/23), according to the World Economic Outlook (WEO): Managing Divergent Recoveries, released by the IMF.

India has the advantage of US as a partner in fighting climate change: Kerry

ndia is a “red-hot” investment opportunity because of its “clean energy” shift, said U.S. special envoy, suggesting that having the US as a partner in tackling climate change is a unique advantage. Mr. Kerry said the U.S. is committed to bringing emissions to below 1.5 degrees Celsius, and hoped to help India cut emissions as well.

Mukhtar Ansari brought back to Banda jail from Punjab prison

Dreaded gangster-turned-politician Mukhtar Ansari was brought back to Banda jail on early Wednesday morning after spending over two years in a Punjab prison. Acting on a Supreme Court order, the Uttar Pradesh Police took custody of the 57-year-old BSP legislator at Rupnagar jail on Tuesday to bring him back to Banda prison.

French anti-corruption authorities made no serious attempts to investigate the suspicions of corruption and favouritism surrounding the Rafale deal, according to the second of the three part investigative series by French media which was released on Tuesday.

Biden to announce all adults in U.S. eligible for Covid vaccine by April 19

U.S. President Joe Biden will announce on Tuesday that all adults across America will be eligible for Covid-19 shots within two weeks, while economic powerhouse California set a June 15 target to fully reopen businesses.