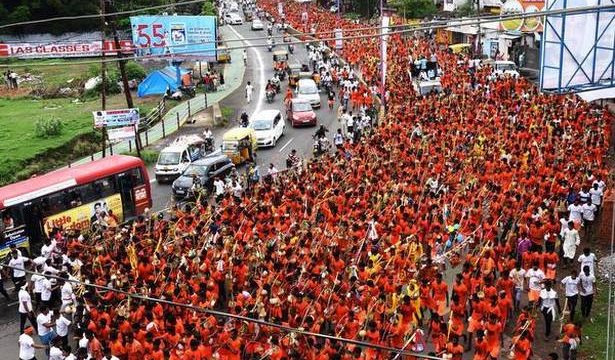 The Kanwar yatra in Uttar Pradesh has been cancelled this year, the State government said on Saturday evening.

Decks seem to have been cleared for the elevation of former Punjab Minister Navjot Singh Sidhu as president of the Pradesh Congress Committee (PCC) after All India Congress Committee (AICC) in charge of the State Harish Rawat held a meeting on Saturday with Chief Minister Captain (retd.) Amarinder Singh, who asserted that he would abide by the party president’s decision.

After recall of paper over data manipulation, NCBS storm over charges of ‘harassment’

Underlying the recent retraction of a scientific paper by the National Centre for Biological Sciences (NCBS), Bengaluru, because it relied on manipulated data, are allegations of inordinate pressure on students from superiors, often at the threat of their careers being harmed, The Hindu has learnt.

A special court on Saturday rejected the bail application of Rajeev Sharma, a freelance journalist who was recently arrested by the Enforcement Directorate on money laundering charge. The accused was arrested by the Delhi Police last September for allegedly supplying confidential information to Chinese intelligence officials.

A dysfunctional Parliament adds to the prevailing gloom, said Rajya Sabha Chairman Venkaiah Naidu urging both the Opposition and the treasury bench leaders to ensure a smooth and productive session.

There are high hopes and some concerns surrounding The Trafficking in Persons (Prevention, Care and Rehabilitation) Bill, 2021, which is likely to be tabled in the upcoming Monsoon Session of the Parliament.

Criticising Prime Minister Narendra Modi, Aam Aadmi Party’s Rajya Sabha member Sanjay Singh said on Saturday that it was surprising that the Prime Minister did not express remorse over the death of award-winning photojournalist Danish Siddiqui while he was covering the Taliban’s advance in Afghanistan.

Formalising live-streaming of court proceedings is crucial for dissemination of information. The spread of information is sacrosanct to free speech, Chief Justice of India N.V. Ramana said on Saturday.

A trainer aircraft skidded off the runway while taking off at the Dhana airstrip in Madhya Pradesh’s Sagar district on Saturday afternoon but the trainee pilot who was flying solo did not suffer any injuries, police said.

The Enforcement Directorate on Saturday arrested Shivlal Pabbi, a Dutch national who allegedly ran ‘hawala’ operations in the garb of ready-made garments trade in the Netherlands. The accused got the proceeds of the crime laundered via some Pakistan nationals based in Dubai.

World champion P.V. Sindhu returns to the Olympic arena determined to do one better than her runner-up performance in 2016.