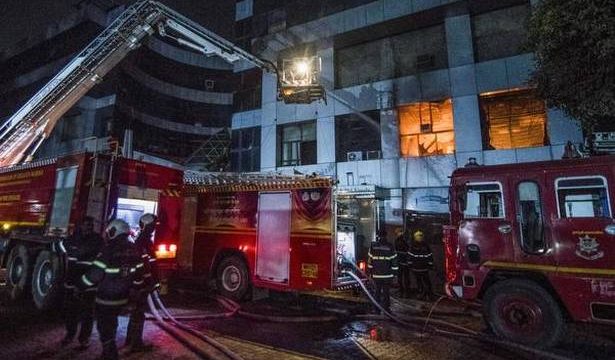 Rahul Sahasrabuddhe approached the HC last week, seeking a direction to the police to not take any coercive action against him

The Mumbai police on Tuesday assured the Bombay High Court that they would not arrest Rahul Sahasrabuddhe, the NCLT-appointed administrator running the Dreams Mall where a hospital caught fire last month, claiming 11 lives.

Mr Sahasrabuddhe approached the HC last week, seeking a direction to the police to not take any coercive action against him.

Additional public prosecutor Aruna Kamat Pai on Tuesday told a division bench of Justices SS Shinde and Manish Pitale that Mr Sahasrabuddhe is not yet named as an accused in the FIR lodged by the police on March 26.

On March 25, a fire broke out in the Sunrise Hospital situated on the fourth floor of the Dreams Mall in suburban Bhandup. The hospital had started functioning in October 2020.

Eleven patients admitted in the hospital were killed in the blaze.

On March 26, a FIR was lodged by the police against owners of the Dreams Mall and directors of the Privilege Healthcare Services Private Limited, which owns the Sunrise Hospital.

In 2018, the Housing Development and Infrastructure Ltd (HDIL), that had owned the Dreams Mall, lost the property to the National Company Law Tribunal (NCLT), which then appointed Mr Sahasrabuddhe as an administrator to supervise the functioning and operation of the mall.

Mr Sahasrabuddhe’s advocate JS Kini told the HC on Tuesday that he had received a letter from the police, asking him to appear before them.

"The police told the petitioner (Sahasrabuddhe) that the Sunrise Hospital has written a letter to the police asking them to initiate action against him for negligence and failing to do his duty," Kini said.

He argued that Mr Sahasrabuddhe was appointed by the NCLT as the mall’s administrator.

"In fact, the petitioner has written several letters to the NCLT, police and fire brigade informing them that the mall and the hospital were not conforming to the protocols and safety procedures laid down by the fire brigade," Kini argued.

The court said it would hear the plea on April 8.

Pai then assured the court that until then, the petitioner would not be arrested by the police.