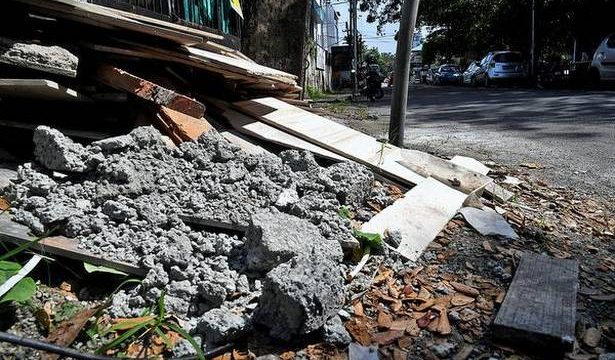 Refuse being used to reclaim paddy fields or dumped in open

Construction and demolition waste continues to be dumped in the open for want of proper surveillance and enforcement of norms under the Construction and Demolition Waste Management Rules, 2016.

The State Pollution Control Board and local bodies lack any concrete information on the quantity of such waste generated in the district. With no proper mechanism to check violations, vendors engaged by the generators of the waste either hand it over to contractors from neighbouring districts of Tamil Nadu or use it as landfill to reclaim wetlands illegally or to rehabilitate quarries here.

Gaps in the scientific management of construction and demolition waste emerged when the Supreme Court directed the demolition of four apartment complexes in Maradu on May 8, 2019. A similar situation came up at the time of the demolition of the Palarivattom flyover too.

The Pollution Control Board had directed the Kochi Corporation to come up with a recycling plant for construction and demolition waste. However, the proposal remained in the cold storage as the civic body had cited lack of funds and land for setting up the facility. The board had suggested turning debris into usable sand and gravel. It’s considered as a good substitute to natural sand in concrete mix. Waste is segregated into big concrete pieces according to the size. Such plants use manual segregation for bigger plastic pieces as well as a magnetic separator for metallic objects. Waste is crushed, washed and used to make ready-mix concrete, kerb stones, cement bricks, pavement blocks, hollow bricks and manufactured sand, according to the proposal. Local bodies were also told to enter into a profit-sharing agreement with private firms ready to set up such plants.