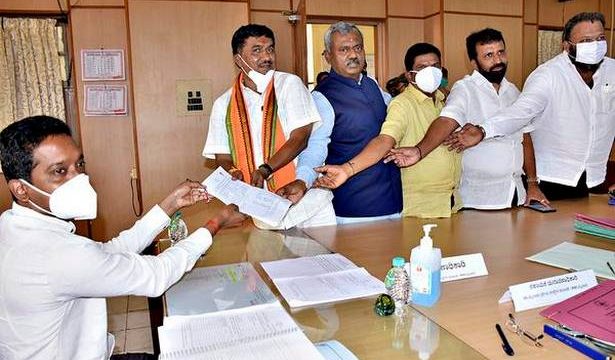 The candidates from the three mainstream parties – Congress, JD(S) and BJP – submitted their nominations to the Deputy Commissioner of Mysuru Bagadi Gautham, who is also the Returning Officer for the dual-member Mysuru-Chamarajanagar Legislative Council seat from local authorities’ constituency on Tuesday.

While the names of Congress candidate D. Thimmaiah and JD(S) candidate C.N. Manje Gowda were cleared by their respective party leadership only on Monday, the BJP had cleared Raghu Kautilya as its candidate late last week.

C.N. Manje Gowda, former ZP member, Mysuru, who joined the JD(S) only on Monday, went to the Congress office on Tuesday and submitted his resignation from the party’s primary membership. He later went to the DC’s office along with former Minister S.R. Mahesh and MLAs Ashwin Kumar and K. Mahadev, besides several party workers to submit his nomination.

Interestingly, both the sitting MLCs R. Dharmasena and Sandesh Nagaraj, whose term ends on January 5, 2022, were not among the candidates, who filed their nominations. About 6,500 members of gram panchayats, town panchayats, town municipal councils, city municipal councils and Mysuru City Corporation are expected to exercise their franchise in the preferential pattern of voting.