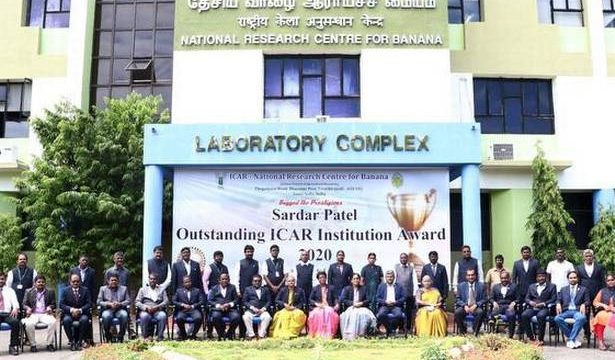 The National Research Centre for Banana (NRCB) in Tiruchi has been awarded the Sardar Patel Outstanding ICAR Institution Award 2020 under the category of small institutes.

The NRCB was selected for the award based on its performance over the past five years, its Director S. Uma said here on Friday. The award, given in recognition of outstanding performance by institutes of Indian Council of Agricultural Research (ICAR), was presented by Narendra Singh Tomar, Union Minister for Agriculture and Farmers Welfare, at the ICAR’s Foundation Day ceremony held on a virtual platform on Friday.

Dr. Uma claimed that the ISO 9001:2015 certified institute has brought about a sea change in banana cultivation by introducing various technologies in cultivation and post-harvest management of banana in the country. The institute had been maintaining Asia’s largest field gene bank with 374 indigenous and 124 exotic varieties along with invitro and cryo gene banks.

The NRCB has also developed a ‘nendran’ variety which can be eaten raw without cooking and the variety was undergoing field trials. It has also identified banana varieties which can be consumed by diabetics.

Dr. Uma said that the bio-safety trials of bio-fortified banana Grand Naine variety developed by NRCB were expected to be completed in three to four years. The varieties enriched with carotenoid and iron through genetic transformation have been developed under an ambitious project aimed at overcoming vitamin A and iron deficiency among Indians.

The advanced tissue culture technology using bioreactors, developed by the institute, shall bring down the cost of tissue culture banana plants plants to just ₹3 to ₹4. The technology is much sought after by even some foreign countries, Dr. Uma said.

The centre has also developed sustainable management practices for Fusariam Wilt -Tropical Race 4 disease, the incidence of which was confirmed in Bihar and a few other States.

The institute has evolved technology packages for sea shipment protocol of traditional varieties such as ‘nendran’ banana. This has enormous potential for increasing export of ethnic bananas to West Asia and Europe.

Answering a query, Dr.Uma hoped that exports of traditional banana varieties from Tamil Nadu would increase substantially in the next few years as more farmers-producers organisations and the required network is created.

In reply to another question, she said that the NRCB along with the Tamil Nadu Banana Growers Federation had recommended the supply of banana (either as fresh fruit or dry banana) in the noon meal scheme. This would not only be nutritional supplement for the children but also help prevent distress sale by banana growers due to price fluctuations. She hoped the suggestion would be accepted under the present government.