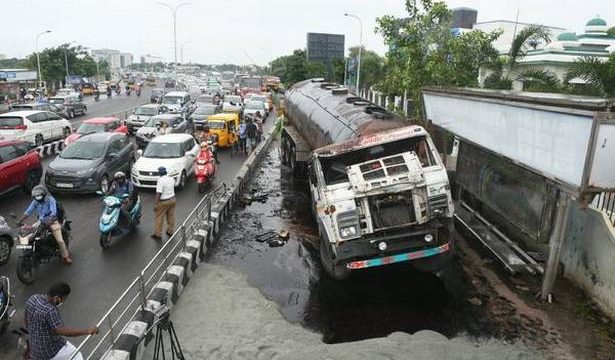 All the oil the tanker was carrying spilled on the road and was cleared by Fire service personnel; driver sustained minor injuries

An oil tanker crashed into the median near Thiru. Vi.Ka Bridge in Adyar in the early hours of Thursday. As the tanker overturned, all the oil it was carrying spilled, making the road slippery.

Police said the truck was carrying oil used for manufacturing soap, and was heading from Puducherry towards the city. Around 1.30 am, driver Ramlal from Haryana lost control when the vehicle reached Durgabai Deshmukh Road. The vehicle hit the median near the bus stand, close to Sivaji Memorial and overturned. The driver sustained minor injuries. Law and order and traffic police immediately reached the spot and sought the assistance of Fire and Rescue Services.

Since it was early, there was not much traffic on the road. Police personnel cordoned off the area and pulled the tanker to the side of road. The oil slick was removed by Fire service personnel spraying water and foam, said police.