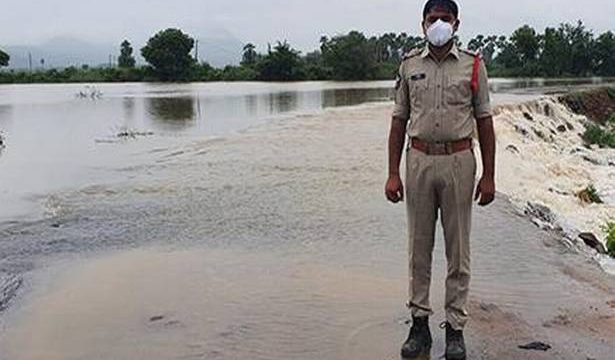 Road link to Khammam and Madhira towns in Telangana from Krishna district was cut off as the overflowing Kattaleru Vaagu (stream) submerged the road at Inagadapa village on Wednesday, after heavy rainfall lashed the villages along the inter-State borders.

The stream has been in spate for the last two days and flowing over the main road at Thotamula and Inagadapa villages since Tuesday night, said Tiruvuru CI M. Chandrashekar.

Many rivulets and streams are in spate and rain water has entered the houses in some low-lying areas.

“Vehicular traffic is disrupted as the vaagu is flowing over the road. We have arranged police pickets on either sides of the vaagu as a precautionary measure,” said Gampalagudem SI V. Satish. Madhavaram, Cheemalapadu, Kambhampadu and other habitations in A. Konduru, Reddygudem, and Tallada mandals were witnessing heavy rain for the last two days.

Lambada tribals from the bordering villages in Telangana come for agricultural work at Thotamula, Gampalagudem and other hamlets in Andhra Pradesh. But, the works were suspended due to heavy rain, the locals said, adding that crops were inundated at some villages.

Meanwhile, the police have intensified patrolling on the canal and river bunds to prevent villagers from entering the streams and cross the road at vulnerable places.