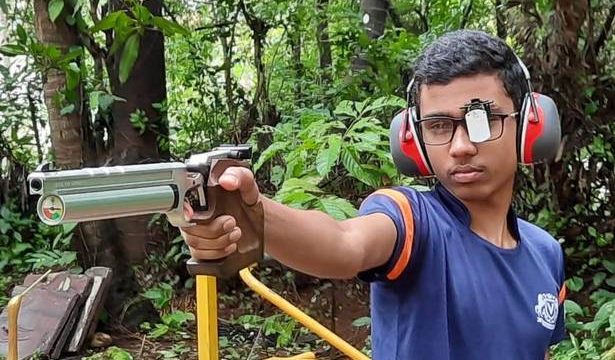 His younger brother is the youngest India Book of Records holder for the maximum number of Kung-Fu side sit-ups.

A 14-year-old boy from Palakkad has become the youngest person in the country to possess an arms licence for sports purposes, according to India Book of Records.

Kannan M., a student of Government Higher Secondary School, Parali, was granted an arms licence by the District Magistrate in January this year. India Book of Records recognized him as the youngest in the country to possess an arms licence for sports purposes.

His licence entitles him to handle a 0.22 caliber Pardini sports pistol for five years and to possess 15,000 cartridges at a time and 30,000 during a year.

A little master in Kung-Fu, kalaripayattu and horse riding, Kannan has already participated in several shooting competitions at school, State and national level. Last year, he won the district championship in the all-age category.

A gold medalist in the State championship, Kannan was excited about his arms licence. “The India Book of Records apart, the arms licence gives me a lot of confidence. In fact it is a confidence booster for me not only in shooting as a sport, but in all other areas, including my studies,” said Kannan.

His father M.K. Mukesh has been encouraging Kannan to take up such exciting sports as Kung-Fu, shooting and horse-riding. His nine-year-old younger brother Nandan has won a national record for the maximum number of side sit-ups in a minute.

Nandan is the youngest India Book of Records holder for the maximum number of Kung-Fu side sit-ups. He also holds the Asia Book of Records for the maximum number of chakrasana (a backbend position in yoga in which the practitioner touches the ground with their feet and hands) in one minute. He broke his own records in side sit-ups and chakrasana several times.

“I’m thinking of introducing horse riding to our school going children at an affordable price. It will no longer be an expensive hobby,” he said.

The little siblings are aiming for the Guinness. “We want to perfect our Kung-Fu from China,” they said.