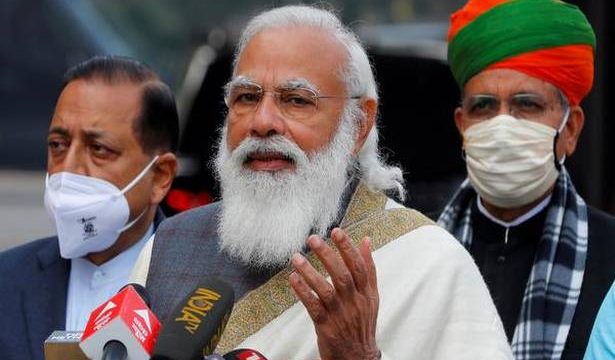 The COVID pandemic should not be a matter of politics and is a matter of concern for entire humanity, Prime Minister Narendra Modi said on Tuesday.

Mankind hasn’t seen such a pandemic in the last 100 years, Mr Modi said while interacting with floor leaders of parties of both houses of the Parliament at a special briefing on the COVID-19 situation organised by the PMO.

The Prime Minister stressed the need to properly plan the vaccination drives at the district level based on the advance availability indicated by the Central government to ensure no inconvenience to the people. He said it is a matter of concern that a significant number of Healthcare workers and Frontline workers are yet to get the vaccine even after six months since the drive commenced and added that States need to be more proactive towards this.

“The Prime Minister spoke about the need to stay vigilant looking at the situation in various countries and noted that mutations make this disease very unpredictable, and hence we all need to stay together and fight this disease,” said a release issued by the Centre.

The release added that a detailed presentation was given by Health Secretary Rajesh Bhushan and he informed that as of date, only 8 States have more than 10,000 cases with majority of caseload in Maharashtra and Kerala. Just five States have a positivity rate more than 10%.

“India had augmented its drug availability throughout the pandemic. CDSCO permitted the increase in number of Remdesivir manufacturing sites from 22 in March to 62 in June which increased the production capacity from 38 to 122 lakh vials per month. Similarly, import of Liposomal Amphotericin was encouraged which saw the cumulative allocation rise from just 45,050 to 14.81 lakh,” said the release on the Health Ministry’s presentation.

The leaders were also informed that while cases are declining at present, States have been advised to maintain buffer stocks of drugs to address any future surge in Covid cases with stress on minimum eight drugs identified by the Health Ministry. “The Union Health Ministry will facilitate procurement for northeastern States and UTs,” noted the release.