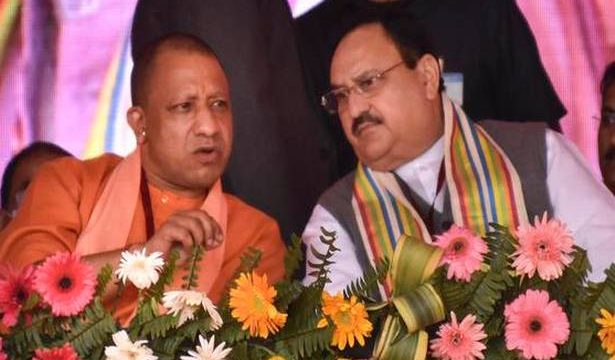 “Our government increased the agriculture budget from ₹20,000 crore to ₹1.23 lakh crore,” he said.

BJP chief J P Nadda on Monday asserted that Prime Minister Narendra Modi has done more for farmers than any farmer leader and targeted the opposition parties, alleging that they believe in family rule and not democracy.

Addressing a convention of booth presidents of Gorakhpur area at Champa Devi Park in Gorakhpur, Mr. Nadda without naming any party said, “We move forward with cultural nationalism and they (opposition) with ‘vanshwad’ (dynastic politics). For us nationalism is important and for them ‘vanshwad’ is everything.”

Many people become leaders of farmers but if someone has done anything for the farmers, it is Modi, the BJP president said in remarks which come days after the prime minister announced the withdrawal of three agriculture laws which had triggered protests.

He highlighted pro-farmer measures taken by the Modi government since 2014.

“Our government increased the agriculture budget from ₹20,000 crore to ₹1.23 lakh crore,” he said.

Under the Pradhan Mantri Kisan Samman Nidhi Yojana, over 10 crore farmers have been given more than ₹1.53 lakh crore directly into their bank account, the BJP chief claimed.

In Uttar Pradesh also, about 2.54 crore farmers got the benefit of the Kisan Samman Nidhi Yojana. A subsidy of Rs 1,200 is being given on a DAP bag, the BJP president said.

“Now, on purchase of a sack of DAP, one gets one sack of fertiliser free due to the benevolence of Modiji,” Mr. Nadda added.

He said under the Pradhan Mantri Garib Kalyan Anna Yojana, about 80 crore people were provided free foodgrain for eight months during the coronavirus period.

Mr. Nadda said he had asked opposition leaders if their conscience does not hurt when “they stand for only one family’’.

“’You (opposition leaders) have taken a ‘theka’ (contract) for clapping for only one family… they replied that they are trapped and cannot do anything in this regard,” he claimed.

While the BJP takes everyone along with the motto “sabka saath, sabka vishwas”, the opposition indulge in politics of vote bank and worry about only a “particular community and family.” “We think about the progress of everyone and they think about their brother and chacha (uncle). Now, he has stopped thinking about chacha also,” he said, in an apparent attack on Samajwadi Party chief Akhilesh Yadav.

Addressing the meeting, Chief Minister Yogi Adityanath said it is the same state where mafia and rioters used to dominate under previous governments but the goons have forgotten hooliganism now.

He said mafia has left the state today as they know that if they spread anarchy, there would be “recovery” from them also.

He said Modi “is engaged in making India capable and protecting its pride and glory”, while “Jinnahwad people were robbing people of their rights’’.

“We get the votes cast for the nation, for the development of the country. We do not get votes for appeasement,” he said.

There are a total of 27,637 booths in Gorakhpur region and 21-member committee have been formed at each of these booths.

From the BJP’s organisational point of view, there are a total of 62 assembly constituencies in the Gorakhpur region, out of which the BJP had won 43 seats and the allies got two seats in the 2017 assembly elections.

Gorakhpur is not only the home district of Uttar Pradesh Chief Minister Yogi Adityanath but he is also the Peethadheeshwar of the prestigious Gorakshapeeth here.

This region includes Azamgarh, which is the parliamentary constituency of SP chief Akhilesh Yadav, and Bansdih (Ballia) assembly constituency of Ramgovind Choudhary, the leader of the opposition in the Uttar Pradesh assembly.