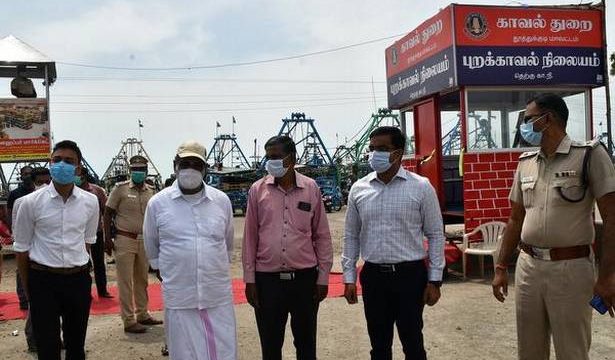 The police finally opened an outpost in the Thoothukudi fishing harbour, which has become a flashpoint of the port town following worsening enmity between two castes involved in fishing with mechanised boats.

After three mechanised boats from nearby Tharuvaikulam, owned by fishermen belonging to Nadar community, were forced to leave the fishing harbour following sustained threats from another caste, who are the majority in the fishing harbour, the three fishing boats could not resume fishing operations. The reason is that these three trawlers, which have been anchored in Tharuvaikulam now along with mechanised boats involved in multi-day deep sea stay fishing, were not allowed to venture into the sea by the officials of Fisheries Department that allows operation of fishing trawlers only from the fishing harbour.

When an audio clip threatening a Tharuvaikulam fisherman by an unidentified person in an abusive language of dire consequences if the three boats were not moved out of the Thoothukudi fishing harbour, went viral on social media, the simmering enmity worsened.

Though Collector K. Senthil Raj convened a few rounds of talks by involving both sides, no amicable solution was arrived at and the stalemate continues even after senior officials from Department of Fisheries from Chennai chaired a meeting recently.

Against this backdrop, a round-the-clock police outpost was opened on Thursday at the fishing harbour by Mr. Senthil Raj in the presence of Superintendent of Police S. Jayakumar.

“If the Tharuvaikulam fishermen want to resume fishing operations from Thoothukudi fishing harbour, the officials of Fisheries Department will facilitate it. Anyone fishing with mechanised fishing trawlers can come here,” the Collector said adding that surveillance cameras would be installed at vantage points.

The police outpost, functioning from a temporary structure, would soon get a permanent building, Mr. Jayakumar said.